San Onofre reactions: The Accurate, the Mixed, and the Ugly 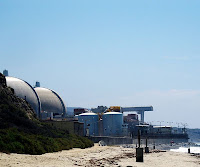 The Accurate and the Mixed

In the post at ANS Nuclear Café today, there's an accurate analysis of the San Onofre shutdown: Environmental Impact Evaluation--Seeing the Bigger (Nuclear vs. Fossil) Picture. In this post, Jim Hopf discusses various issues, including San Onofre. Among other things, he notes that old fossil-burning plants at Huntington Beach have been brought out of retirement to make up for San Onofre's power. As Hopf says:  the shutdown will  result in ~2000 MW of additional fossil fueled generation for several decades.

For a mixed analysis, let's go to NEI Nuclear Notes, with an blog post that quotes many California newspapers on the closing: Reactions to San Onofre Closing: It "ought to jolt the governor."  The Sacramento Bee admits:  The plant cannot be replaced solely with sun and wind, at least not with current technology. The Bee notes that Senator Boxer hails the shut-down. The article also notes that the possibility of rolling blackouts: ought to jolt the governor [Jerry Brown], the official who will be held most responsible if California faces rolling blackouts this summer and beyond, as happened during [former Gov.] Gray Davis' truncated tenure.

Ah yes, I remember it well.  I lived in California during the earlier set of rolling blackouts.

However, according to a recent article in the San Luis Obispo paper, the California System Operator does not expect rolling blackouts due to the plant shutdown. They expect to make up the loss of power with gas systems, renewables, and transmission lines. Earlier articles on the shut-down focused on how tight electrical resources are likely to be: this article is more reassuring. Meanwhile, Jim Hopf's statement at ANS Nuclear Café remains true: closing San Onofre means more fossil generation.

The Mixed and the Ugly: The debate at Huffington Post Live

Yesterday, the Huffington Post Live (webstreaming) sponsored a discussion about San Onofre.  This was an excellent idea.  Instead of reading short quotes, you can hear several people discuss the closing. The four people were:
I think it always helps to hear people speak directly. The moderator, Jacob Soboroff, kept things going and prevented anybody from hogging the spotlight for too long.  I have embedded the debate below.  If you want to see the comment stream from the listeners (138 comments, including a few from me) you need to go to the web page.

So why do I call this debate "mixed" and "ugly"?  The idea was good, the moderator was good, and so forth.  What more do I want?

My main problem was that Mr. Freeman made the most outrageous assertions and was seldom challenged.
I expect Riccio to say things about nuclear power that are not true: this doesn't surprise me.  But the Freeman statements bothered me.  Over and over again, Freeman spoke as if there's a free lunch out there: there's grid-level storage, there's co-generation (without mentioning fossil fuels), there's heat right from the earth!

There is no free lunch, Mr. Freeman.  Sorry.

I congratulate Steve Kerekes of NEI for his excellent job at answering some of Freeman's statements. For example, Freeman claimed that large plants decrease the reliability of the grid. Kerekes answered that was a funny thing to say when you had the kind of grid reliability we have had in this country.

However, in order to answer the endless assertions of Freeman and Riccio, Kerekes would have had to take all the time of the discussion. This was clearly impossible.

Another thing: Riccio, Bergman and Kerekes had webcams aimed at them, and you can see them speaking.  Webcams are easily available, but Freeman didn't use one.  Instead of facing a camera,  Freeman chose to show a picture of himself in a cowboy hat. Therefore, you can't read his face as he spoke.  Did Freeman know he was saying some things that weren't true? I wish I could have seen his face on-camera.

Enjoy the debate discussion below, and go to the web site if you want to see the viewer comments.  We need more of these multi-person events.  I am glad that Huffington Post Live arranged this one.

Posted by Meredith Angwin at 1:18 PM

Meredith-
If I could follow up on the points made by Peter Sandman in Rod's podcast, as well as the information on Sandman's website...

I think this material is extremely important. We can argue about terms like "risk" and "outrage" or "reaction" and "emotion", but the nuclear industry is left with a horrible public image problem. Ultimately, the "outrage" level overwhelms the actual risk factors as the industry has defined them. It is really a psychological problem, and therefore needs a psychological solution.

Sandman's recommendations may be a little too 'surrendering', in my opinion, but he does understand people's emotional motivations. Perhaps a little humility from the industry is needed to open up people's minds to the message.

Sandman said some very important things about avoiding the ways we tend to escalate confrontation. All of us can learn from him.

However, I still think that his redefinitions of common words is a very obvious type of framing. My own word choices use ordinary definitions. In my opinion, a theory can't be dependent on odd word choices. The theory should work even if you describe it simply.

However, if you don't correct misstatements, it can look like you are agreeing with them. It's not as simple as it might be.

Sandman has many excellent insights. However, he uses new definitions for old words, and this choice doesn't help me understand anything.

That former nucler regulator Freeman thinks energy storage is now practical is amazingly ignorant. Maybe you should put together a compendium of statements by anti-nuke nuclear regulators that illustrate they are ignorant about the whole topic. We now have a nuclear "agnostic" leading NRC. This wordsmithing is cover for underlying anti-nuke beliefs that get them appointed to the NRC.

After watching the video debate, I was appalled at a statement by Bergman, who said that SCE hasn't adequately explained what happened with the Unit 3 tube leak. Either Bergman is technically illiterate, which wouldn't surprise me, or he intentionally misled the debate moderator. SCE, Mitsubishi, and the NRC have all come to the conclusion that the root cause of the tube leak was fluid elastic instability set up by the high steam flow velocities in the upper tube bundles. This information is easily obtainable with a Google search. As Meredith has stated, operating at 70% power would have reduced the flow velocities, and changed the vibration on the tubes. It is not that complicated, and should not have taken the NRC a year to review.

With regard to the public image problem for nuclear power, I can think of one area where some communication with the public might be very useful. The new SMRs being developed by B&W, Westinghouse, NuScale, and others are going to be very different machines. How about a public relations campaign that goes something like the following:

This type of message that directly addresses the fears of the public can be adapted for the existing plants, too, but the NRC-required B.5.b portable pumps and generators need to be stressed. These ideas can be communicated, if someone wants to inform the public.

Peter51, we have to be careful with any message about "new" plants that leaves an impression that the old ones are somehow not safe, when they are in fact very safe. We can't throw away the operating record of the last 50 years where there has been no documented case of public harm coming from nuclear plant operation, a record no other major industrial activity can match. If it were me, I'd start with that, and then say something like, "And, to maintain and extend that record, here are the things our new plants can do.", and go through the list as you suggest.