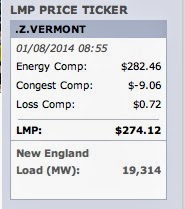 In mid-June, Governor Shumlin spoke with utility regulators and "tapped the brakes" on the idea of a rapid build-out of gas pipelines and electric transmission lines. According to an article by John Herrick in Vermont Digger, Shumlin said this infrastructure might become obsolete, and new technologies could lessen the need to transmit large amounts of power.

However, in late June, Shumlin reversed his position. On June 20, a panel of energy experts representing the governors of all the New England states met: the meeting was reported by Deborah McDermott of Seacoast Online.  In this meeting, the panelists agreed to ask for a "tariff" (tax) on electricity. The tariff would be used to finance natural gas pipelines and electricity transmission lines.

The state-appointed panelists stepped on the gas for an infrastructure buildout.

As the energy panelists said--something has to give in New England.

Once upon a time (earlier this year, actually) a polar vortex came to call in New England.  Sub-zero temperatures  meant that great quantities of natural gas were used for heating homes. Therefore, not enough natural gas was available for gas-fired power plants.  Oil and jet fuel were called into service to provide electricity, and prices on the grid soared. As many news reports noted at the time, there are not enough natural gas pipelines into the Northeast.

On January 21, all six governors of New England got together as part of the New England States Committee on Electricity to address the pipeline problem.  The governors signed an agreement requesting ISO-NE to support in the development and filing of any tariff changes [fees to users] for two purposes.

In the first purpose, these fees would enable new transmission lines to be built. The lines would bring between 1200 and 3600 MW of low carbon power into the New England electrical systems.  Translation: we will build new power lines to get electricity from Hydro Quebec.

In the second purpose, governors also requested a fee on electricity for the purpose of building new pipeline capacity  to bring natural gas to the area.  The idea is that consumers should pay more for electricity now, in order to build gas pipelines as soon as possible.

Note: Governor Shumlin signed this agreement with these requests.

And Now It's Summer

Meanwhile, the seasons have changed. Peonies bloom, fireflies blink in the twilight, and Vermonters protest energy projects. Pipeline opponents are concerned that an already-planned gas pipeline will carry fracked gas. They also worry about water contamination. They are protesting, chaining themselves to the doors of the gas company, and so forth. One protester was arrested for alleged assault.

People in Vermont do not like this pipeline. Their reaction doesn't look good for building even more pipelines in Vermont.

But what about transmission lines?  This situation is more confusing because several lines have been proposed. John Herrick of Vermont Digger wrote a comprehensive report in early June: Vermont Smack in the Middle of Crucial Electricity Supply and Demand. As you can see in the report, Vermont seems to be in favor of at least some of these transmission lines, as long as enough goodies are attached. A quote from the Herrick report:

[TDI] wants to bury a 150-mile transmission line under Lake Champlain. TDI, a subsidiary of Blackstone Group, a financial services firm, has lined up private capital for the estimated $1.2 billion project.....TDI says it would also donate tens of millions of dollars to the state for costly Lake Champlain cleanup – or whatever the state decides is best.

Gee, that sounds familiar. "Donate tens of millions of dollars..."

Governor Shumlin in June: Let's Slow Down the Infrastructure Build-Out

As reported by John Herrick in Vermont Digger, Governor Shumlin spoke to utility regulators in early June.  Shumlin "tapped the brakes" on the build-out.  He said that we don't know that "with the evolutions of technology and the local, distributed generation of power...(we may end up) paying for huge stranded costs if we build tons and tons of delivery." Shumlin spoke of the evolution of cell phones. In parallel with cell phones, Shumlin claimed that "new technologies could soon lessen the need to transmit large amounts of power from faraway areas."

Well, not really. Let's look at the power situation in the Northeast. In Vermont, Vermont Yankee is shutting down.  In Massachusetts, three major coal plants (Salem Harbor, Brayton Point, and Mt. Tom) will close in the next few years, some in the next few months.The grid operator said that Brayton Point was a "must-run" facility. The plant owners answered: "Too bad, we are closing it anyway in 2017."

In short, without "power from faraway areas," the grid around here could get seriously unreliable. We will need transmission lines.

Some of my friends have looked at the Governor's statement and concluded that the man is simply dumb about energy.  He doesn't want power plants, and he doesn't want transmission lines. Yes, this is the man who said that Germany  got 30% of its juice from solar, and that a nuclear plant must be kept running with mostly full staff for years after shutdown.

Shumlin has proven that he is no genius on energy matters.

However, Shumlin is very smart about politics and negotiations.  His recent statements can best be understood as part of a negotiation with anyone who would build any infrastructure in Vermont.  If you build it, you must pay us!

Shumlin has surely noticed that without Vermont Yankee, there will be no easy source for new funds in the Clean Energy Development Fund. I think he has decided to tax the new infrastructure: in other word, tax whatever replaces Vermont Yankee.

When Shumlin makes a speech against the infrastructure development, he becomes better able to get concessions (money) from the infrastructure developers. Shumlin has shown that he can be a formidable enemy to an energy project.  As one person on Facebook wrote: "He's got Vermont Yankee's head on his wall now."  If a project doesn't want him as an enemy, the project owners will probably pay what he wants them to pay.

In my opinion, Shumlin is not dumb. He's smart like a fox.

As a blogger, I plan to have the last word here:

Foxes are smart for themselves.  They are not known for their public-spirited actions.  Ultimately, the ratepayers will bear the costs of Shumlin's way of being-smart.

Posted by Meredith Angwin at 1:43 PM

Like when he foxed Doyle out of his property, but later, after a s-storm, reversed the agreement.

Forgive me for mentioning in my column of December 2011," One recent blog comment on the Shumlin energy plan hit the mark: “These people believe they can power the state on the combustion of unicorn flatulence.” One might note that the collectors and sellers of unicorn flatulence will make out handsomely in the process, while Vermont’s energy consumers take a hell of a beating.

It is also worth noting that in addition to their lack of public spiritedness, foxes are also omnivorous predators that will consume just about anything they can find or capture. Perhaps Scumlin's taxation approach mirrors this fox-like attribute? Tax whatever you can wherever you can.