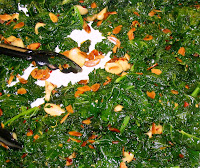 With all the endless hassles about "who said what to whom" about piping at Vermont Yankee, I decided to do a cheerful post for once. Just for a change. Then I will return to our regularly scheduled difficulties.

First of all, a big thanks to Rod Adams for his perspective on the tritium leak at Vermont Yankee. He points out that the EPA describes tritium as one of the "least dangerous radionuclides." A person would have to drink swimming-pools worth of the stuff to receive a lethal dose. They'd drown first. Rod compares this tritium leak to massive oil spills that are ignored by the press.

Oil spills are dangerous. Oil is carcinogenic. In general, the negative health effects of petroleum hydrocarbons are ignored by the press and the population. It would be funny if it weren't sad.

In Montpelier, my friend Howard Shaffer told a legislator that this tritium leak was a spill, like spilling oil on the floor of your garage, but just like the oil, it could be cleaned up. "Well, at least the oil won't give me cancer," the legislator answered. (She will be not be named in this blog. I try to protect the clueless.)

Hydrocarbons are sources of cancer-causing compounds. Here's a nice little how-to article about changing your oil, with the usual warnings about not getting it on your skin, and a note that most landfills will not accept used oil, even in sealed containers. The government warns you to avoid prolonged contact with motor oil, as it caused skin cancer in laboratory animals.

Another thanks is due to John Wheeler, whose podcast compares this tritium leak with earlier leaks at San Onofre. John uses a Brazil nut analogy instead of the banana analogy I used, to compare drinking from the test well with ordinary exposure to beta-particles. We both point out that the amount of radiation in the test well is a fraction of the amount we get on a daily basis.

Sometimes there are unintended consequences to blogging. I fear that someone will read this and decide to give up bananas and Brazil nuts. I may have scared some people. They may be coming to the erroneous conclusion that tropical fruits are radioactive.

I hope these readers understand that potassium is slightly radioactive, but it is also a necessary part of everyone's nutrition. (However, people with some types of kidney disease must avoid potassium.) If you don't have kidney disease, and you don't want tropical fruits, please eat some spinach or kale. Half a cup of cooked greens has about the same amount of potassium as a banana.
Posted by Meredith Angwin at 4:46 PM