The Murky Road to Renewables and Geothermal in Vermont

The Biomass Plant
Last Saturday, Howard Shaffer and I went to the VECAN conference on energy savings and renewable energy. The first speaker was governor-elect Peter Shumlin. I admit, I was bored with his repetitive statements against Vermont Yankee. I especially think his "junker car" analogy is getting old. However, I was interested in what he would say about renewable energy in Vermont. I am in favor of renewable energy use (in reasonable amounts) and I am a member of my town's energy commission.
As I described in an earlier post, a biomass plant is proposed for southern Vermont. The plant would be located close enough to Vermont Yankee to be relevant for replacing a small part (30 MW) of Vermont Yankee's power (620 MW). The plant would also use a grown-in-Vermont renewable resource --wood. The protests against the plant have been fierce, but you might think Shumlin would love it. It's renewable. It's local. It's not nuclear.
Of course, Shumlin doesn't love it. At the VECAN meeting, Shumlin was asked about this plant and another proposed biomass plant. He answered that biomass is the "least attractive" renewable technology, and that he hoped the biomass plants underwent Act 250 review. Act 250 is Vermont's draconian environmental review process, so hoping for an Act 250 review has clear implications. Shumlin isn't supporting the biomass plants, and he hopes they don't get built.
What do I think about the Pownal biomass plant? I decided not to take a position on it because I have not studied it enough. To make up my mind, I would have to investigate the sources of the wood and the pollution control plans for the plant. In contrast, Shumlin knows his own mind on renewable matters, whether or not he actually knows the facts.
Geothermal Heat 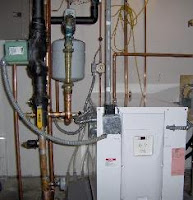 However, there are renewables that Shumlin favors. Geothermal. Shumlin announced an upcoming conference on geothermal heating for Vermont. Heating with green energy! The earth's own energy! What could be better?
Geothermal heating sounds very natural, but it doesn't use the earth's energy in some natural, passive manner. Geothermal heating in Vermont is actually electric heating, using a ground-based heat pump. I am in favor of geothermal heat pumps, because they use electricity to replace oil. You can make electricity many ways, including low-carbon sources like nuclear power. Burning oil in your basement is simply...burning oil.
Most people in Vermont use oil and oil-derived products (propane) for heating. It gets cold up here, and Vermonters use a lot of oil in the winter. Some people use biomass for heating: wood stoves and pellet stoves. However, since larger buildings are almost all heated by oil, I would have to say that oil-based products are the main source of heat in Vermont in winter. Geothermal heating could replace some of this oil.
Research on Geothermal Heating Was Sponsored By the Electric Industry
Back home from the Conference, all the Commission members received a note from the head of Hartford Energy Commission, announcing the geothermal heating conference in January. I wrote a response: When I was at EPRI (Electric Power Research Institute) improved heat pumps were a major research area, because improved heat pumps could compete with direct use of fossil fuels. Their presence would be a new market for electricity.
The EPRI heat pump research succeeded, and one of the results is this geothermal heating conference.
Part of my reason for writing this note was that there is too much good guys versus bad guys rhetoric in the energy business. Many of the people on my energy commission list will be upset to learn that one of Shumlin's favored "green" technologies was developed to provide a new market for electricity. But so what? I think people should open their eyes to the wonderful things electricity can do for us. Developing new uses for electricity can make our lives better and our energy use more efficient.
Environmental Implications
I use fuel oil for heating, like most people up here. I don't particularly enjoy having an oil tank in my basement. As you can see by this fact sheet about preventing problems from fuel oil tanks, replacing millions of basement oil tanks would prevent a lot of environmental problems. By using electricity, we can replace those tanks. We need abundant inexpensive electricity in order to be truly "green."
In other words, for geothermal heating in Vermont, we need Vermont Yankee. The nuclear plant has had negligible environmental effects, especially compared to home-based oil tanks that contaminate groundwater all over the country.
Unfortunately, the concept of using electricity to prevent pollution may be a more complicated view of green than some people are ready to accept.
Woodpile image and Water to Water Heat Pump image both from Wikimedia
Posted by Meredith Angwin at 6:50 PM

I believe that biomass plants are opposed for much the same reason that nuclear plants are opposed - they actually run 24/7 and can replace other forms of generating electricity, especially natural gas. They have to have the same clean air filters as any plant of their capacity and, in order to be economical, they use waste wood that would otherwise sit piled up on the grounds of a sawmill - or be burned by the mill to make room for more sawdust. I have seen piles that covered acres and mills that regularly burn the stuff just to remove it. In some areas of the midwest they are making pellets, mulch and paper with this. However, these uses do not use all the available fuel.

So the arguments that this would would sit naturally on the "forest floor" are silly. That wood is not the source of fuel for most biomass plants. They are providing a service to mills by burning the fuel in a regulated way and creating electricity from the heat.

David. Thank you for the explanation.

We have a lot of wood pellets made and burned in Vermont. At least some of the sawdust is used for pellets. If you go to this website, you can see a wood pellet manufacturer who strongly supports Vermont Yankee.