You Better Be Good--to Your In-State Customers 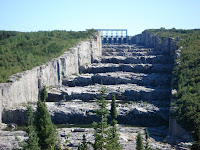 Utility Truths
Among utilities, it is a truth universally acknowledged that the customers in your regulatory jurisdiction are always in need of a good deal. You had better give them a good deal. You had better be good--to your in-state customers.
Your in-state regulators are the ones that can impose new rules and fees. You want those regulators to think of you as wonderful people who are saving money for their ratepayers. You want to make your in-state regulators look good.
Out of State and Out of Mind: Heaven Help the Marks!
On the other hand, when a utility looks toward out-of-state or out-of-country customers: for these customers, the truth is different. The truth is more like "God Save the Mark!" Or in this case, "Heaven Help the Marks."
I was thinking of this when a Canadian friend emailed me recently. He said (slight paraphrase)
That VPIRG guy on the debate....he sure made a sales pitch for HydroQuebec (HQ) power. Don't you guys realize that we only want your money?
My friend was referring to James Moore of VPIRG's comments on our recent debate. Like many of those opposed to nuclear power in this state, Moore has great faith in future purchases from HydroQuebec.
But my Canadian friend said the Canadians only want our money. This is a truth acknowledged even by the HydroQuebec web site.
The Profits Flow North. The Profits Come from Vermont.
The HQ annual reports tell the story. The HQ 2009 annual report show this very telling graph (you can doubleclick on the graphics to enlarge them) 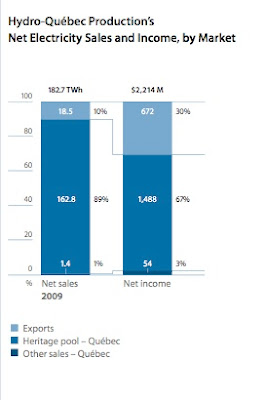 In 2009, HQ exported 10% of its power...and made 30% of its profits on the export. And that wasn't even a good year for HQ exports. In the 2009 report, HydroQuebec noted that the falling revenue was due to more difficult market conditions
In the HQ 2008 Annual Report, we see that in previous years, HQ made a far higher portion of its profits on exports. In 2007 and 2008, they made around 40% their profits on 10% or less of their sales. These profits came from the export sales. Basically, little Vermont is subsidizing the power prices of everyone in Quebec. 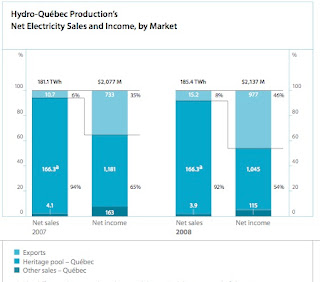 Bad Guys Up There in Canada? No, Not Bad Guys. Utilities.
I don't want to pick on HQ here. As I said in the first paragraph, if you are a power plant or an entire utility, you give the customers in your regulatory jurisdiction the good deal, and make profits from customers elsewhere. As far as I know, the same is true with Vermont Yankee. The Memorandum of Understanding calls for VY supplying 4.2 cent per kWh to Vermont utilities. That price is only for Vermont utilities. More than half of VY power is sold out of state. I believe that the out-of-state prices for VY power follow the market. I think most VY profits come from the out-of-state sales.
In short, as we get ready for the holidays, let's resolve to be good to our in-state power suppliers. Because the in-state suppliers are the ones who will be good to us! Opponents may talk about HydroQuebec power being available to Vermont. However, by the nature of utilities in general:
We will never get as good a deal from HydroQuebec as we get from Vermont Yankee. We're the Export Market for HydroQuebec and the In-State Market for Vermont Yankee.
Important Note: A few days ago, Dan Yurman had a very insightful blog post about Shumlin and Vermont Yankee. Why Peter Shumlin Will Save Vermont Yankee. I recommend it highly.
Image of Spillway of Robert-Bourassa Generating Station from Wikipedia.
Posted by Meredith Angwin at 5:35 PM

Meredith, interesting post. If the VPIRG guy is anti-nuclear, then his fight against Yankee won't stop Vermont from using nuclear power. HQ's biggest generator is Gentilly 2—a CANDU. That means anything it sells to Vermont includes a good portion of nuclear. Also, HQ will likely continue to wheel (mostly nuclear-generated) off-peak power from Ontario through to Vt.

In fact, I have heard that Quebec has been doing the latter for the last few months. This in spite of having a brand-new gas-fired generator at its disposal. Apparently they can make more money by just reselling Ontario power than by generating their own with gas.

This will last until the Ontario market price goes back up.

Anybody who thinks gas is a better deal should watch what HQ does.

You write so well and clearly. Can the newspapers pick up you as a columnist for the untold story? Nice job. Mary Gerdt, citizen power consumer, not afraid of nuclear power

Steve. Thank you for the comments. Power wheeling within Canada is way beyond my knowledge! Good that we have you, blogging at Canadian Energy Issues!
http://canadianenergyissues.com/

Mary. Thank you for the compliment about my writing! I appreciate it so much. I have been in a little glow today, from your comment, and from an old friend on Facebook sending me a message. He asked me to send him one of my short stories. He read it a long time ago, and he said he really liked it but he can't find it. However, I don't know which story he means! So the story (pun intended) continues....

How can Vermonter's not understand the cost of power??

I would recommend a trip to ISONE to see the power grid and the inter-connections and what concerns they(ISONE) have about how to replace HYDROQUEBEC..if it was lost.
They would be amazed at the cost of spinning reserve.