Rallies and Protests at the Vermont Yankee Plant

Tomorrow: A Rally For the Plant, At the Plant
Vermont Yankee is holding a refueling outage. They are moving ahead to keep that clean electricity flowing, despite the uncertainties of the court case. Many of us appreciate that, and we are holding a rally at the plant gates tomorrow afternoon, at 4:30 p.m., shift change. We want the people at the plant: regular employees, contract workers, and managers who made the decision to load fuel...to see we support them! More details in the previous post, which includes email addresses and phone numbers to reach the organizers: Howard Shaffer and me.
Retrospectives on the Morning Street Rally and the Evening Plant Rally of September 12 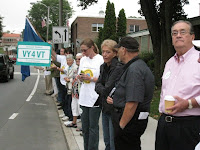 On the morning of September 12, the Entergy versus Shumlin/State of Vermont lawsuit began in at the Courthouse in Brattleboro. Early that morning, the Safe and Green Campaign held a vigil in front of the Court House, and several pro-nuclear groups held a rally. The pro-nuclear groups included the Energy Education Project of the Ethan Allen Institute, and the Vermont Pilot Project of the American Nuclear Society. I am director of the Energy Education Project, and I blogged extensively about our rally.
The Evening Puppet Show and Protest
The morning vigil and the rally were not the only activity on September 12, however. In the evening, at 6 p.m, the Clamshell Alliance held a protest at the gates of the plant in Vernon Vermont, a few miles from Brattleboro. The protest featured a Puppet parade, radical marching band, street theater and direct action.
At first, I read nothing about that protest in the press. On the evening of September 12, all the reporters who cover Vermont Yankee were busily filing their first-day-of-the-Federal-trial stories, not racing to the plant to see yet-another-opponent-demonstration.
The Aftermath
The evening protest did eventually get covered in the press. Obliquely.
During the September 12 protest at the plant, people parked across the street from the plant at the Vernon Elementary School. As the Brattleboro Reformer wrote on September 28: The Vernon School Board is weighing a new ordinance to prevent non-school related parking on the property after receiving several complaints following a recent protest against the Vermont Yankee nuclear power plant. Board members said Monday night that protesters, gathered at the plant’s gate just across the street from the school, were using the parking lot for unauthorized purposes.
On October 5, the protesters showed up in the press again. Susan Smallheer at the Rutland Herald (behind a paywall) wrote that (A) group of protesters, who were arrested for the first time at Vermont Yankee’s gates on Sept. 12, are due in court later this month. A call to the Vernon Police department revealed that the arrests were for trespassing on Vermont Yankee property.
Apparently, puppet shows and direct action lead to problems in the parking lot and arraignment in court. In my opinion, the parking ban will pose a bigger difficulty for the plant opponents than the trespassing charges.
Looking Forward
The Clamshell Alliance is going to be holding a rally at the plant on October 30. Here are notes from one of their recent planning meetings.
One of the points made at the Clamshell Alliance planning meeting: State of VT is an ally; don’t alienate with arrests
Oops.
Posted by Meredith Angwin at 10:00 AM

I can imagine a puppet show of fear and hate and lies being presented to the kids with full adult approval. Maybe the plant should give the local kids an inside tour to help rinse the brainwashing. Hasn't anyone told Vermonters(sp?) how pretty things will be after tearing down a couple of square miles worth of pristine forests and razing mountain tops that the Green Mountain Boys had scaled for wind power just to assuage frets of a speculated "if" nuclear doomsday?