The Vermont Energy Plan: Little Time to Comment, No Time to Review 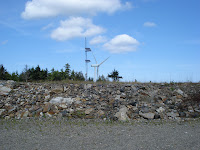 This blog post is a slightly edited version of an article I wrote for True North Reports last week. I am grateful to True North Reports for permission to reprint it on my blog.
Governor Shumlin wants a plan--without Vermont Yankee
Shortly after Governor Shumlin took office, he said he was very surprised to see that the State Energy Plan included Vermont Yankee operating past March 2012, operating beyond its design date. He claimed my team (is) frankly scrambling to put together a shutdown plan that should have been designed over the years...we have grid challenges, we have challenges in rates....
Shumlin, a plant opponent, did not change his opinion of "design date" after the NRC extended Vermont Yankee's federal license until 2032. Instead, he and his team put together a plan for Vermont without Vermont Yankee, the Comprehensive Energy Plan (CEP). The plan was written under the auspices of the Department of Public Service (DPS) and is now going through the public comment process.
The CEP was released on September 14, and the public comment period ends on October 10, less than a month later. (October 10 is a week from today.)
The CEP covers electricity, heating, transmission, and transportation. It is over 600 pages long, including the appendices. The main volume is 368 pages. Less than a month does not give the public much time to review the documents.
What is a Plan?
The CEP includes ambitious renewable goals, but little actual planning. Among other things, it doesn't address the issue of electricity supply without Vermont Yankee in a straightforward fashion.
For example, in the summary document, the electricity section (pages 7 through 9) includes expansion of the standard offer program for renewable energy, and hiring a new "renewable energy project development director" for DPS. The electricity section does not mention natural gas or acknowledge any gap in the electricity supply.
However, the home and business heating section (pages 10 through 12) does note that there might be an electricity supply gap. On page 11, the heating section encourages the expansion of a gas pipeline into Vermont because "Natural gas can address two key needs: reduce Vermonter's reliance on overseas oil for heating....and help fill a gap in electric supply." (emphasis added).
We Have Goals and Stakeholders
The CEP contains goals such as 90% of our energy needs by renewable sources by 2050. (page 3 of summary document). There are no numbers or dates for future construction of renewable sources, however. No statements such as "this much wind energy by this date." The CEP does contain a solid recapitulation of Vermont's historic energy demand and supply sources.
However, that is not the same as a forward-looking plan.
The Institute for Energy and the Environment of Vermont Law School(VLS) recently announced that they had extensive input on the CEP. The Law School input is visible in the CEP. The CEP contains historical data, things to be considered in choosing energy sources, and a great deal about "process" and "stakeholders."
However, the CEP is not what an engineer would call a plan.
Controversy
Despite its lack of content, the plan has come under fire from VPIRG (Vermont Public Interest Research Group). Shay Totten, of Seven Days, blogged about VPIRG's early criticism of the plan. VPIRG felt the plan did not move far enough and fast enough about renewables.
According to Totten, Ben Walsh of VPIRG did some quick calculations about renewable goals, and fired off an email titled "Really? This is what we waited for?" Walsh pointed out that Vermont utilities added 1.6 percent new renewables under Governor Douglas, and, calculating back from the goals, the CEP calls for only 1.1 percent new renewables per year.
Four hours after Walsh sent the email, his boss James Moore wrote an apologetic email: "We are thrilled to have a comprehensive energy plan that shows real vision for where this state can and should go." However, Moore noted that "There are parts of the plan that we feel are weak, like the renewable energy requirements."
Shay Totten's post has insightful comments on what this exchange means in terms of the usually cozy relationships between Governor Shumlin and VPIRG. It is worth reading.
After the Totten blog post, the controversy between VPIRG and the State continued. The Rutland Herald reported that James Moore of VPIRG criticized the renewable energy plan even more strongly about a day later. He claimed that the administration target puts renewable energy growth in Vermont on a slower annual pace than it is on now.
Elizabeth Miller, the DPS Commissioner, was also quoted in the Rutland Herald. Miller said she wasn't sure how VPIRG calculated this renewable energy target (number).
In my opinion, this controversy was caused by the fact that the plan has long-term goals and few actual numbers. VPIRG was criticizing numbers that DPS did not explicitly put in the plan.
Examining a Plan Goal 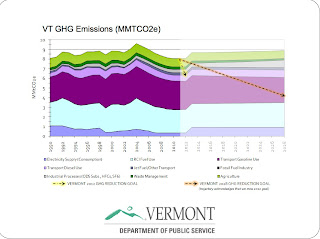 As an example, it is worth looking at one chart with plan goals. The following chart on the right is on page 14 of Volume two of the CEP.
This shows the plans for Greenhouse Gas emissions for the future in Vermont. (You can click to enlarge it). The level of greenhouse gases produced from the electricity sector is shown as rising rapidly after 2012, presumably after Vermont Yankee closes. The chart also shows projections for lowering greenhouse emissions are (at minimum) aggressive, and probably unworkable. It is a chart of goals, not a plan.
The one part of the chart that seems grounded in a defined event (closing Vermont Yankee) is the rise in electricity-produced greenhouse gases after 2012. The CEP claims that it does not actually take a stand on Vermont Yankee. On page 150 of volume 2: This plan will not take a position on whether VY should continue to operate; that is the role of state laws and processes and is the subject of the pending lawsuit.
However, since the impetus of writing the plan was to have an energy plan without Vermont Yankee in the mix, this statement is a bit disingenuous. For example, a recent editorial about the plan in the Burlington Free Press notes that: Given the governor's history, no one should be surprised that nuclear energy -- Vermont Yankee in particular -- has no long-term future in the Shumlin plan.
Note: A Burlington Free Press article by Nancy Remsen: Vermont Faces Up to Energy Challenge gives an excellent overview of the plan, particularly the home heating (natural gas and wood) and transportation (electric vehicles) section. Full disclosure...I am quoted in the article.
A Way to Comment
There is still a week left to send input to the DPS on the CEP. Though the plan itself is quite long, the summary document is only 19 pages, and can be reviewed rapidly. The public comment page
http://www.vtenergyplan.vermont.gov/comment/public_comment
You are asked to address only one energy topic per comment (electricity, conservation) but you can submit multiple comments.
Or you can use the email address to comment.
PSD.energyplan2011comments@state.vt.us
These electronic forms are probably the best ways to comment, though there are public meetings on October 3 and October 6, also.
http://www.vtenergyplan.vermont.gov/events#public%20hearings
Approval Moving Forward
The CEP approval process is moving forward rapidly. The length of the CEP documents and the shortness of the comment period are somewhat intimidating. Still, it is possible to comment, perhaps by choosing one area of the plan. Citizens interested in Vermont's energy future should comment. As citizens, we have an obligation to have our voice heard.
Posted by Meredith Angwin at 6:45 PM

Just to show that Vermont Yankee is not the most dangerous thing in the world.

Look at the bright side. Without sufficient electricity to run their toys and flat screens, all the city folk, who have moved to Vermont and made it a communist hell hole, will go back to New York. They sure aren't going to chop wood to stay warm next winter.

The Vermont Comprehensive Energy Plan can be summed up in one sentence: All energy consummed in Vermont must be generated out of state because our Nuclear Power Plant is vulnerable to tsunamis and wind power negatively impacts our view sheds. A second sentence could be added stating that to the degree that we can impose our will on our neighbors, these items shall not be constructed in a neighboring state or canadian province in a location where they can be seen from any point within the State of Vermont.

You sent four copies of this comment. I published the most recent one only. Please feel free to comment again if you want, but I figured the repetition was not what you wanted.