Rod Adams is exploring ways to keep Vermont Yankee operating.  Vermont Yankee is a solid factory, and it makes a product that remains in high demand. As a matter of fact, the demand is high and the product (electricity) goes through periods of very high demand compared to the supply.  During the polar vortex last winter, the price of electricity on the grid soared to above 30 cents per kWh, while diesel fuel was pressed into service to meet the demand. 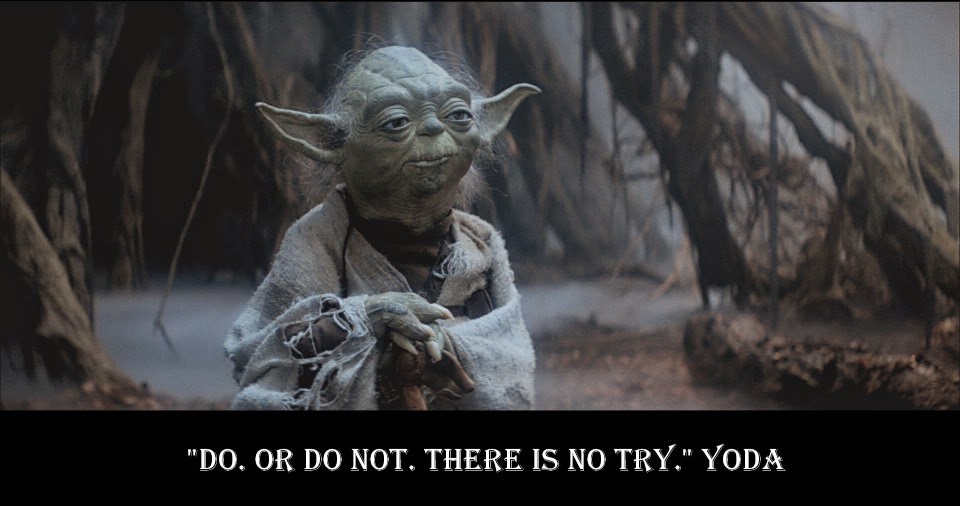 "Rod Adams is exploring ways..." Is this a fair description? When Luke Skywalker says: "I'll try," Yoda gives him the advice that has passed into legend:

Is Adams merely "trying"?  No.  Rod is highly committed to saving Vermont Yankee. This is not "trying."

On the other hand, despite Yoda's saying, some work succeeds in reaching its goals.  Some work does not.  With this work, only time will tell.

Emotional Commitment: After the announcement that Vermont Yankee would close, I wrote a guest post at ANS Nuclear Cafe about my emotions about the closing: We Are Not Spock.  Rod Adams followed this post with a guest post at my blog in November, 2011  The first words of his guest post were: "Meredith, you are not alone in your sorrow." Rod also wrote a post about the plant at his own blog: Nuclear professionals can, and should get emotional.   This post has over 100 comments.

I am starting here, with Adams's emotions and commitment, instead of starting Adams's planning.  Because....nothing gets done without emotional commitment. Our opponents know this. I am trying to acknowledge this.

Excellent Plant: Adams took a tour of Vermont Yankee in March of this year, and quickly wrote a post about why the plant should be saved: What a Waste--Vermont Yankee is in beautiful condition. The post has over 60 comments. (Note, the comment streams on Rod's posts are usually worth reading.)

Employee Ownership: At this point, Rod's strategy began to take shape: Employee Ownership. On May 1, on his own blog, Adams posted Vermont Yankee, a Clean Kilowatt Cow That Deserves Saving. (Once again, 55 comments.)  Some key sentences in this post are quoted below:

When I left the plant I ended up following a truck on the highway from Cabot Creamery that said “Owned by Dairy Farmers Since 1919.” That started the wheels turning.
Vermont has a deep history of cooperative businesses. ....The state is also one of several states that allows companies to incorporate as ‘B’ corporations with bylaws that enforce social goals that sometimes conflict with maximizing profits.

In this post, he hints at his work finding financial backers for the employee buy-out plan.  He is committed to this. He may succeed or he may not, but he is not merely "trying." There is no try.

Adams is contacting people, and Adams will be out in Vermont again this summer.  If you know of people who can help him (any venture capitalists in the crowd?) please contact me or Rod.  If you don't know Rod's email, write me at mjangwin at gmail and I will put you in contact.

Buying the plant should be inexpensive, I think.  The plant is also quite profitable right now, having recently shared $17 million in excess profits with Green Mountain Power. The requirement to share that money would not survive a change in ownership, by the way, and the new owner should have an even more profitable plant.  However, the new owner will have to prove that it has the resources to maintain the plant, and that is where the backers come in.  The backers would be guarantors, as I see it. I don't think they would have to invest large sums of money immediately.  I hope Adams comments on this, because I could easily have it wrong. I have never tried to buy a power plant. :-)

But looking beyond Vermont Yankee, the things that Adams learns in this attempt may well save other power plants in less vitriolic states.  Adams is highly committed to this and we should help him.  This is not a mere "try."

Posted by Meredith Angwin at 10:14 AM

Thank you for the kind words of encouragement and for your continued support.

Minor proofreading - the correct possessive form of Adams is Adams's - still pronounced the same way as before.

In my world, there is such a thing as "try" as in "give it the good college try" or "floating a trial balloon." Though I am committed to pursuing reasonable alternatives, I am not so committed that I will engage in self destructive behavior like withdrawing from family commitments, stopping my work in developing my writing career, or even canceling my sailboat racing commitments.

I am quite serious about the fact that I think Vermont Yankee is a good money-making opportunity and the idea that employee ownership might be a valuable way forward since many of VY's "economic" challenges are really political challenges because of the added burden of costs imposed by politicians who were gunning for the plant.

You've written eloquently about those attacks but I am not sure if people realize how much more difficult they would have been for the state to execute against a plant owned by local people instead of "Entergy Louisiana." Effectively countering the demonization line of attack could be worth tens of millions each year.

There is a similar, but not quite the same course of action available in the form of public / cooperative ownership where the power production is owned by cities or by the customers themselves. This model in in widespread use around the US.

One of the shining examples in the nuclear world if Omaha Public Power District, which patiently worked its way through restarting FT. Calhoun rather than preemptively shut it down like Duke did with Crystal River and SCE did with San Onofre.

Since the days of Lewis Strauss, the threat of public ownership has been used to encourage investor-owned utilities to do a more comprehensive evaluation of the value of nuclear energy.

It is a good time to dust that weapon off. I plan to use it to help current nuclear power plant owners that they are not in just any old business - they are in the business of providing reliable electricity that enables the rest of the economy to function and often saves lives. If they think their nuclear plants are too much trouble to operate, they need to make reasonable efforts to find someone who will take responsibility for doing what is right.

If they don't, the public might decide to take their own course of action and produce their own electricity.

I think the real pinch point will turn out to be the value of the decom fund. As pointed out on a comment on Mr Adam's blog it might be worth twice the value of the plant itself. If Entergy LA really sees that as just a Market Opportunity investment they may not seriously consider an offer to buy. But an offer will make them "put up, or shut-up", on the motive for closing VY.

Rod,
Thanks for the mentioning me and of our work in keeping Vermont Yankee running.
It was pleasure meeting you on your trip here. I look forward to seeing you this summer.

I see three hurdles in keeping VY going. One is the Certificate of Public Good from the State? How do we get that?

Money. Getting Entergy a price they can live with.

The license. They have it. Getting it transferred to other owners will take a long time, too long.

I think there is a way. More later.

Rod--I didn't mean to cast you as a superhero!
I just wanted to say something like "let's take this seriously." Sorry for any hyperbole! I didn't mean to imply you would devote every waking minute to this endeavor.

Mjd and Howard..good points. This is one complicated subject.

While an interesting idea, there are several significant challenges facing a buy out of Entergy's interests. (1) transfer of the license to a credible entity, (2) financing the buy out, (3) hiring a management team and paying for their work on the acquisition, (4) convincing the State of Vermont your group is not Entergy in disguise and getting the requisite state regulatory approvals.

A realistic assessment of the prospects for success for these and related issues could be done in a workshop setting - in Vermont - over several days. Bring experts on licensing, finance, etc. to hold poster sessions and capture feedback pro and con.

The outcome of the workshop would provide a more clear eye'd idea of what needed to be done and whether it could be done.

Perhaps ANS could help sponsor it under the rubric of what it takes to move an operating nuclear plant from corporate to an employee-owned firm or electric coop. It might be too much to ask ANS as a scientific society to do this, so perhaps NEI might be approached for support?

Separately, IMHO the losses of Crystal River and San Onofre are two instances of self-inflicted outcomes by the utilities that owned the plants.

Sorry for the anonymous comment. I wasn't able to make a Blogger account to link my identity. The correct possessive form of Adams is Adams' - i.e. "Rod Adams' plan to save the plant began to find backers".

I am encouraged to read of such plans. See the following NRC blog post which talks about plants needing a $250 million guarantee - http://public-blog.nrc-gateway.gov/2014/04/30/the-nrc-keeps-close-watch-over-comanche-peak-during-chapter-11-proceedings/ - would this be provided by a bank? Are there other employee-owned plants in the US?

I like Dan Yurman's idea of a locally held workshop/seminar this summer(I plan to be in the area in mid-July); additional sponsors for such a program could be the DoE itself, Pew Center for Climate & Energy Solutions, Nuclear Matters, & "The Breakthrough" And if nothing else it would be sure to attract lots of local/regional media attention to the cause.

Additional problems may well surface due to the possibility of last minute binding lawsuit settlements between Entergy and the VT legislature allowing VY to operate thru its 2014 fuel cycle: the VT state gov't was attempting to scuttle even that!

National attention should be called to the fact that while ~70% of US electricity is fossil carbon fired, in contrast >70% of VT electricity qualifies as either ultra-low or carbon free electricity because of VY. Given latest IPCC report and the Obama admin's own release of a climate change jeremiad the single largest source of zero-carbon generation to close in the US in 2014 with no provision in place to replace its low Co2 kWs cannot NOT be relevant and topical. This has international implications as well such as for the German Energiewende, perhaps WANO & WNA would be interested sponsors.

I would definitely be in on this. However what would worry me out of the gates is fighting the state which has made up their mind. I am not sure how those State vs. Fed (NRC) scenarios work.

This could mean initial seed money would go to shoring up legal costs. It would be a shame to invest and watch the plant end up mothballed anyway.