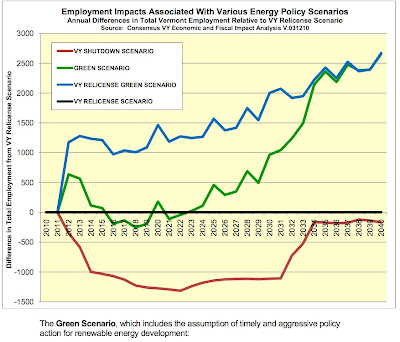 However, considering how the modeling was done, this jobs-in-the-green-scenario graph is more telling. 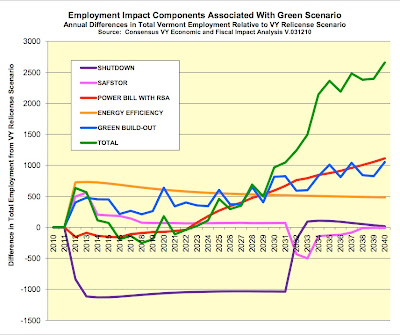 You will note that Safstor (early-stage decommissioning) adds jobs, energy efficiency adds jobs, green buildout adds jobs. All of this happens despite the high price of power. The lower price of power in later years doesn't seem to have any effect. However, anti-Vermont Yankee legislators love this graph because it proves that we don't need Vermont Yankee for jobs. If you believe it.
Modeling
A friend of mine, an excellent scientist, said that if you gave her twelve parameters, she could curve-fit an elephant. With overly-complicated models, you can easily delude yourself that you have found the right answers. (She believes in simple models whenever possible.)
The econometric model of the legislative report has many parameters and some careful thought. Unfortunately, the results don't make sense. The results basically violate simple economic principles of supply and demand.
Complex models of physical phenomena should be checked by experiment, and complex economic projections should be checked by common sense.
Despite the problems of these models, I believe that Vermont Yankee plus renewables is the correct way forward for Vermont. IBEW and the legislative model agree on the negative economic effects of a simple shut-down of the plant. I am disappointed that I cannot find the legislative model convincing about the positive effects of a green build-out.
The legislative model contains too many assumptions about efficiency, too many parameters, and perhaps too much politics. I want Vermont Yankee plus green build-out for Vermont. I wish I could have more faith in the model presented to us by the legislature.
Graphs and quotes are from the Consensus Economic and Fiscal Impact Analysis Associated with the Future of the Vermont Yankee Power Plant, Executive Summary, March 2010, prepared by Economic & Policy Resources, Inc. and Kavet, Rockler & Associates, LLC
In collaboration with Synapse Energy Economics, Inc., the Vermont Department of Public Service, Green Mountain Power Corp. and Central Vermont Public Service Corp.
Posted by Meredith Angwin at 4:00 PM

Sorry Meredith did not read your post just tell me where they will build the SSGT to inefficiently burn natural gas. Check out the satellite view of Rancho Seco. SMUD still has lots of room for solar but what did they build?