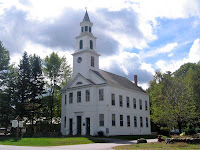 Last night, I went to my Town Meeting. I felt at home, among friends, and not at all marginalized. The same thing happened last year at Town Meeting. This wouldn't be surprising, except that in both cases, I set up a table in the lobby and handed out pro-nuclear literature. On my table, I had a sign Yes Vermont Yankee, and two stacks of handouts from NEI: Nuclear Energy Quick Facts and tritium.
Some people weren't interested, some people took the handouts and said they were for nuclear power. Some people took the handouts and said they were for nuclear power but against Vermont Yankee because the management was lousy and people lied. Some people said they had a relative who worked in nuclear, while others said "No thank you, I know enough about THAT!" which didn't sound exactly positive. It was all very civilized.
There was one woman who was a little bit on the fringe, in my opinion. She harangued me about people "dropping like flies" in France after Chernobyl and how healthy the French lifestyle is. We ended up in a minor argument about butter. (She believes butter is good for you.) She might have felt at home at some of the meetings in Brattleboro, or at the Montshire meeting sponsored by the Sierra Club. At my Town Meeting, she was an oddity.
Enexus Again
My local representative was there. He said he had taken the tour of the wells and excavation at the plant, and he been very impressed. "Quite an operation they have there." He continued that "My concern is...."
I interrupted him, because we have HAD this conversation before, and I knew what he was going to say.
"They're not spinning off Enexus," I said. "Enexus is dead."
"Really!" He seemed taken aback. He always says: "We don't know who is going to own this plant."
"When did you hear this about Enexus?"
"This morning."
"Oh." He paused, regrouping. "They have to give us a good rate, though, and take care of decommissioning."
It was the most positive interaction I have had with him.
Being There
Well, this was my town meeting in my town, and I know a lot of people. A fellow member of the energy committee pulled me away from my table to meet the fire chief. The fire house was recently assigned to be "my" town building.
One friend came by and said he hoped he could help the schools by his vote. Another friend said she hoped she could help defeat the school budget by her vote. Another person came by and smiled and I failed to recognize him and I think may have offended him. And so forth.
At the meeting, four hundred and fifty people voted for the school budget, two hundred and fifty voted against it, but they all consider themselves mainstream people. Being pro-nuclear and pro-Vermont Yankee is also mainstream. In a recent survey of town meeting attendees, which polled around 12,000 Vermonters this spring:

More than 50 percent of Vermonters polled support the closing of Vermont Yankee nuclear plant, with 31 percent in favor of relicensing the Vernon facility and 17 percent unsure. This is a major change from last year’s results when the plant had support from 40 percent of those polled, 37 percent disapproved and 23 percent unsure.

In other words, even in the present climate, about as the same fraction of people want to relicense VY as voted against our local school budget. It is 50 to 30 against VY, while our school budget was 450 to 250. Last year, more people wanted to relicense VY (40%) than close it (37%).
The Mainstream
In other words, being for or against VY is as mainstream as being for or against a school budget. The recent vote in the Senate (26 to 4) and the fervor of the Anti Vermont Yankee Walkers or Citizen's Action Network speakers gives a different impression. My experience of town meetings reflects the polls of town meetings. I think these are more accurate reflections of the opinions of people in Vermont.
(I understand that a poll of town meeting attendees is not a well-designed poll, but such polls do indicate what politically-active people in Vermont are thinking.)
In short, pro-nuclear people are not a group at the margins of society. In my opinion, we have to take our part on the stage of these debates. We have to be there, in our towns, handing out literature, making contacts with others who support nuclear and so forth. We are not a fringe minority, and we have to stop acting as if we were.

Don't forget. I'm still running the Helen Caldicott Satire Contest. Why cars, toothpaste and paper (so far) are terribly dangerous. Get your entry in soon. Contest ends April 15. Enter early and often!
The image above is not a church, but a Vermont meeting house, built for town meetings. It's really pretty, but our town meeting took place in the high school gym. Most town meetings do.
Posted by Meredith Angwin at 9:33 AM

You may have good reason to believe that you had a positive interaction with your local representative. However to me, it sounds like you knocked over his objection, and all he did was think of something else that he could call a deal-breaker. In other words, none of these are the "real reason" he objects to Vermont Yankee's efforts to get an extension, but that reason is not rational, so he hides it behind other excuses.

You are right. He always talks about doing the best for Vermont, he's neither for or against nuclear but just needs a good deal for Vermont, etc. But he occasionally says things that make it clear he thinks nuclear is very unsafe.