Real Information at a Real Meeting 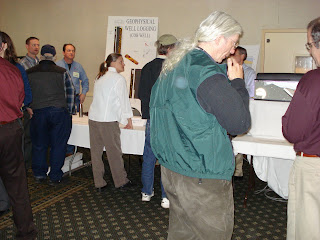 Vermont Yankee hosted an informational meeting for the public yesterday at the Ramada Inn in Brattleboro. The meeting room was set up for poster-type exhibits, like a science fair. Exhibits included:
Entergy also had a great new fact sheet about tritium at Vermont Yankee.
The people there were plant people who knew about the plant systems, and contractors who knew about other systems (such as well drilling and hydrology). It wasn't a PR show; active professionals provided information. 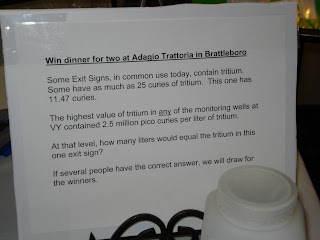 The picture above shows part of the tritium area: the rules of a contest and a one-liter bottle. The tritium EXIT sign is not in the picture.
Another good thing about this science-fair arrangement was that anti-nukes couldn't disrupt the meeting. Part of this might have been the police presence: I counted three policemen in the room at one point. There have been shouting and manure-throwing at other meetings, and people were prepared for the worst at this meeting. Of course, in that case, the worst didn't happen.
I found the police presence reassuring. On the other hand, my friend Howard Shaffer takes the attitude that the anti-s don't actually hit you, so what's the big deal?
The "science fair" type set-up didn't lend itself to disruptions. There was no built-in audience as people moved from display to display. As one organizer said: "Someone shouting would just look silly. People would wonder 'why is that man shouting at the chemist?' " Many anti-nukes attended, but all they did was talk endlessly to various people at the exhibits, or grab press time.
The Meeting and the Media
In this news video, you can see Deb Katz grabbing half the air time, while identifying herself only as a Massachusetts resident, and not as the president of an active anti-nuke group that has hired their own lobbyist in Montpelier (through an affiliate group).
Aside: For those of you who follow this blog faithfully, yes, this is the same Deb Katz that debated the clown in Putney. End Aside.
Other anti-s also got significant play in the press, and some reports noted that not many people came to the event. But some people who came were quite happy to have the company reach out (as WPTZ reported).
"I really don't know much about tritium, so before I got all excited I thought I'd get the details," said Bill McGee, who lives four miles south of the plant in Massachusetts, and attended the forum.
Here's a note from Howard about the beginning of the meeting:
There were perhaps as many as 10 of the hard core antis there. I know most of them by sight and name. I was holding a sign outside, on the motel grounds as a guest of VY. The motel would not let the antis have signs on the grounds since they were not guests of VY. They could and did come into the meeting as you know. One of the TV reporters began to video my sign and Deb Katz stepped in front of the camera with her sign, and got an interview. One of her partners tried to engage me in conversation while this was going on..... The antis signs said, in black and yellow, like road signs "Caution Entergy LIES ahead." 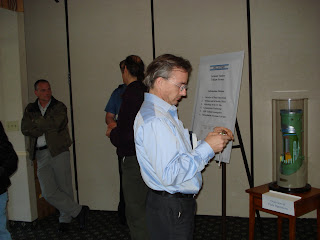 The meeting was worthwhile. Good information was available, and it was presented very clearly. The plant people were patient and open to questions. The anti-s came, but they weren't surrounded by whipped-up crowds of followers. Plant personnel and plant managers attended, and all visitors were treated very respectfully (no matter how repetitive some of the questions were, from the hard-core antis). I was impressed. At this meeting, everything that could be done to encourage participation was done. Entergy should be proud of itself.
I wish there had been better media coverage. Some of the media noted the affiliations of the people they interviewed, which was good. Others didn't, allowing Ms. Katz to claim to be merely a citizen of Massachusetts, rather than a professional anti-nuclear activist. I hope this changes in the future as more meetings are held. 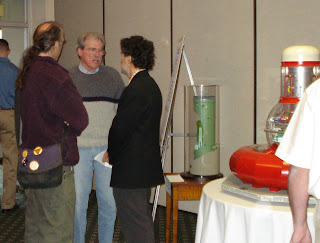 Pictures and people:
When Rod Adams blogs that he is awaiting my blog post on the meeting---that means I had better get busy and post! Hope you like it, Rod!
A few words about the pictures. The overview at the top shows Dr. William Irwin, (teal jacket) and some of the exhibits. Dr. Irwin is Radiological Health Chief for the Vermont Department of Health. He was the Department of Health man-on-the-scene at the tritium investigation.
The next picture is the guess-the-jelly-beans game for tritium. I saw several people enter a calculation.
The next picture is Clay Turnbull of the New England Coalition (an anti-nuke group) taking a picture of the reactor model, while a security guard keeps watch in the background. (By the way, there's an interesting quote from Arnie Gundersen on the New England Coalition website.)
Clay Turnbull of the New England Coalition just emailed me that the quote from Arnie Gundersen was incorrect and has been eliminated from the New England Coalition website. In case people have already visited their website, I decided to leave my original statement in this post, and add the new correction. I thank Mr. Turnbull for the update.
Near the bottom, Senator Mark MacDonald (gray sweater), a long-time foe of the plant, confers with his supporters. They have managed to position themselves with all of their backs facing the information and displays.
Actually, that last sentence was catty and unfair. Senator MacDonald was clearly un-interested in the exhibits, and made an extremely perfunctory tour of the room. On the other hand, Gary Sachs (the tall man in the pony tail) spent hours talking to various people from the plant. I don't know the third man in the picture.
Also, I was happy to meet people who read my blog, people who don't read my blog, and especially Representative Patty O'Donnell from Vernon. (She reads my blog sometimes.)
Posted by Meredith Angwin at 4:00 PM

When I think about what is going on, I imagine a tiny piece of garbage, say a lunchbag, found blowing around on the grounds of an auto manufacturing plant. A tiny brown smear is noticed, which is subsequently identified as a trace of PCB which turns out to be present on the bag because an employee used the bag to wipe some brown fluid off his hands after removing a leaking old fluorescent fixture at the plant. Somehow, the bag escapes the normal garbage disposal process at the plant and ends up blowing around on the lawn. It never leaves company property.

The Michigan Senate, responding to public concern and pressure, immediately votes to shut down the entire auto industry.

My thoughts are with all the VY employees during this time. I am an operator at WF3 and I am absolutely stunned at the ignorance of the public in that area.

I was at VY last year for a benchmarking trip and I have to say, it is the only place I have ever been where I didn't feel comfortable telling people what I did for a living. It is something I am usually very proud of and in that area, I kept it under wraps because I was concerned for my safety.

I hope that these people understand that just because you turn it off doesn't mean that the plant just does away. The fuel will still be there just as long as it would have been had the plant been kept running...except that now they won't be able to see it because they'll be in the dark!

I also hope Brattleboro realizes that to take the jobs (the GOOD PAYING JOBS, might I add) away from the that area is certainly not going to help their economy. Again, something they can all sit and discuss during those long, cold nights when they can't turn on the TV.

+I know the tritium q answer! If I typed it into my cell phone correctly, it would take about 4,588,000 liters of that wells water to equal the tritium in the exit sign. Thank goodness I didn't drink that much!
+I wouldn't expect Brattleboro to immediately go dark whenever VY shuts down, but I know there will be several other consequences. The locals think that it is better to have solar, because it pays less! I am not joking, this is almost a quote; renewable jobs pay less, but requires more man hours per kWhr, so it would provide more jobs. Therefore, shutting down VY would CREATE jobs in VT. Great reasoning, huh? They're just missing a FEW other factors in this discussion.