Nostalgia Time: Shumlin in Favor of Vermont Yankee in 1998

Shumlin and Vermont Yankee: The Old Days
In 1998, Peter Shumlin was President Pro Tem of the Vermont Senate, and Vermont Yankee was owned by a consortium of utilities. In 1998, Shumlin sent a letter in support of Vermont Yankee to Mike Empey, a Vermont Yankee supporter. Mike Empey just sent the letter to me and gave me permission to post it. Shumlin writes that he fought an effort to prematurely close Vermont Yankee, "I can assure you that as long as I am one of the people in charge of the leadership of the Vermont Senate, no such provision will become law under our watch. Vermont Yankee contributes tremendously to the economy in Windham County, not to mention our power needs." Yes. Shumlin wrote this and signed it.
Mr. Empey works at Vermont Yankee, but he is not any type of official spokesperson. This posting of a 14-year old letter is not an official Entergy statement. Seems to me that official Entergy statements are never this amusing.... 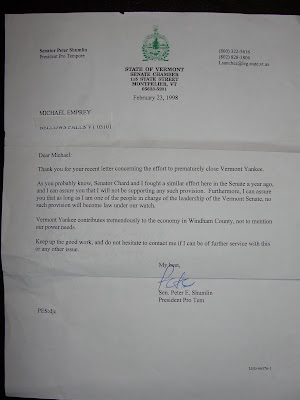 You can double-click to enlarge the image.
Posted by Meredith Angwin at 7:46 PM

Meredith,
Why not post it on VTDigger for all to see.

Willem...I don't know how to do that. I send them op-eds which they sometimes publish.

I am still recovering, and this is all I can do today. Can you send me an email about how to get this on Vermont Digger?

The key phrase is "Vermont Yankee contributes tremendously to the economy in Windham County" aside from supplying power.

I trust the PSB will be considering that when renewing Vermont Yankee's Certificate of Public Good.

Peter Shumlin has never said he was anti-nuke. In 1998 the plant was owned by our utilities. It was operated well and had some oversight.

Shumlin started opposing the plant, like most Vermonters did, when things began to go wrong like the collapsing of the cooling tower.

You're trying to make him out to be Mitt Romney who has changed his positions on everything, including his tax returns, about day or so. Things were a lot different in 1998 than they are today. You should know better.

Bob, I said nothing about Shumlin except that he signed the letter. If you want to compare him to Romney, that is your privilege.

Don't give me this "you should know better" junk, either. I am always of two minds about posting comments from you, as you know. This one almost didn't make it in, due to your little finger-wagging at the end. Go publish your comments on your employer's blog (the anti-nuclear group that pays you to be a lobbyist) in the future.