There is No Jobs Bonus. Decommissioning Helps Long-Haul Truckers But It Destroys Local Communities. 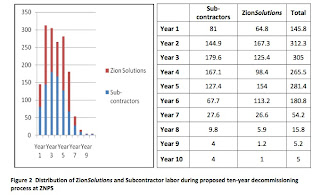 Decommissioning Plans, Made by Nuclear Opponents
A recent post described the new taxes that Governor Shumlin's administration wants to place on Vermont Yankee. There are two taxes, actually: one on fuel rods, and one to increase the decommissioning fund. Meanwhile, at ANS Nuclear Cafe, Howard Shaffer wrote about opponent tactics. Opponents plan to form new "affinity groups" with the same people as members, but new names for the groups. Decommissioning is a major focus of these groups.
It's also a major way for the opponent groups to salve their conscience about throwing hundreds of people out of work. "Decommissioning will be a jobs bonus!"
No. It won't.
Will Decommissioning Funnel a Billion Dollars into the Vermont Economy?
In an early March press conference, Governor Peter Shumlin called decommissioning Vermont Yankee “a huge jobs issue for us.” He wanted immediate decommissioning of the plant because it would “fuel $1 billion” into the Windham County economy over the next ten years.
The jobs Shumlin is describing are not jobs held by the current workers. As reported in an article in True North Reports and updated in this blog, more than 80% of the plant employees would be laid off within two years of plant closure, whether or not the plant is put into SafStor. There are 650 employees at the plant now: in two years, less than 100 employees would remain.
Though plant people would be laid off, contract labor would be brought in for decommissioning. What kind of payroll would the contractors bring to the area, compared to the payroll of the plant when it is operating?
The Contractors Come to Town
People who have lived through a local plant decommissioning say that the effect of contractors is not noticeable in the town. Bob Blagden, a selectman in Wiscasset Maine while Maine Yankee was decommissioned, said the “contractors must have picked up some people, but it wasn’t noticeable.” A long-time resident of the town, who did not want his name used, said “They may have hired some people, but this was nothing in comparison with what we lost.”
Are these people correct? Or is Shumlin correct in thinking decommissioning is a jobs bonanza?
The residents of Wiscasset are correct. It took some research to figure this out, but a best estimate is that the total salaries for contractors in the area would be about $20 million a year, while the plant has a payroll of $65 million a year. Decommissioning is a job cliff, not a job bonanza.
What is a Billion Dollars?
Before reviewing the question “would decommissioning fuel a billion dollars?” for Windham County, we have to ask what “fueling a billion dollars” means. Is this money straight payroll, or does it count “multipliers”?
The “multiplier” effect is the well-known economic calculation of how many other jobs are based on a group of steady jobs. For example, two economic studies of Vermont Yankee started with the fact that there are 650 employees at Vermont Yankee, and a yearly payroll of around $65 million An IBEW study in 2008 calculated that Vermont Yankee provided 900 “multiplier effect” jobs in the state, while a separate report prepared for the Vermont legislature in 2010 claimed Vermont provided about 700 multiplier-effect jobs. Both estimated a multiplier effect of at least two times the plant payroll.
Being conservative, we could estimate that Vermont Yankee adds a total of $100 million a year to the local economy (less than a times-two multiplier effect). At that rate, VY “fuels” one billion dollars to the local economy in ten years, and in twenty years (till 2032) it would fuel two billion dollars.
In comparison, how much money would the contract labor of a decommissioning project add to the local economy?
Decommissioning the Yankee Plants
The total expenditure for decommissioning Yankee Rowe, Connecticut Yankee, and Maine Yankee was $750 million, $500 million, and $850 million, respectively. (Data from a paper on “Lessons Learned from Decommissioning” by Wayne Norton, president of Yankee Atomic.). The projects took varying amounts of time, from 7 to 15 years, but let us assume they all took ten years, in parallel with the Shumlin time estimate. At that rate, expenditure rates on decommissioning were between $50 and $85 million a year, numbers similar to that of the Vermont Yankee payroll.
However, comparing total costs of decommissioning to payroll costs of an operating plant is an apples-to-oranges comparison. Most significantly, decommissioning a nuclear plant includes major expenditures outside of the plant locality.
Decommissioning a nuclear plant requires millions of pounds of slightly radioactive waste to be hauled to low-level waste disposal sites in the West. Maine Yankee shipped 460 million pounds of waste, and Connecticut Yankee shipped 350 million pounds. Container manufacturers, long-haul truck drivers, and waste disposal sites are the recipients of waste-disposal money, not the people in the towns near the plant.
How much money stays in the towns near the plant and how much goes to hauling and waste disposal sites? We can start by looking at the probable payroll (not total cost) of decommissioning.
The Zion Explanation
I could not ascertain the local payroll versus haulage costs for the decommissioning the Yankee plants. These numbers are proprietary to the companies that did the work, and I hit a dead end trying to find out. However, there's a current decommissioning project in Illinois. The company doing that project, EnergySolutions, was very helpful to me.
EnergySolutions is beginning to decommission the Zion Nuclear plant in Illinois. EnergySolutions has a Zion website partially devoted to showing that Zion decommissioning will bring economic benefits to the region. The accompanying pie chart is on that website. The EnergySolutions public outreach officer for the Zion project, Larry Booth, was also kind enough to send me the economic report on which the chart is based "The Economic Impacts of Decommissioning the Zion Nuclear Power Station." (The report is not on the web.) 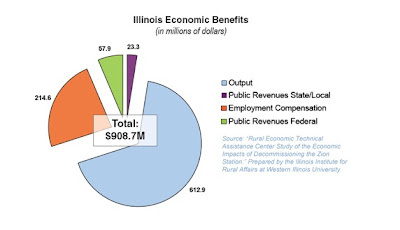 On the pie chart, we can see that the salaries for the ten-year decommissioning process at Zion add up to $215 million dollars.
In more detail, page 14 of the Zion economic report has a chart of personnel. That chart is at the top of this blog post. Double-click to enlarge.
At its height, in years 2 through 5, there will be around 300 people on-site decommissioning the Zion plant. That is about half the number of people working at Vermont Yankee currently. The six other years, the staffing is much lower, down to five people in year 10. Clearly, decommissioning is not a ten-year jobs bonus for the site.
Much of the Zion economic project report is devoted to explaining the multiplier effects of the project. This is called “output” on the pie chart. In the report’s careful reasoning, $200 million in on-site salaries generates $600 million in other economic outputs over ten years. However, using that multiplier, $1.3. billion in salaries at Vermont Yankee ($65 million per year for twenty years) would add $3.9. billion in other economic benefits, for a total economic impact of $5.3 billion dollars over the next twenty years of operation.
Apples to Apples Comparison
The solid facts are that Vermont Yankee has a payroll of $65 million per year, and decommissioning Zion will be a payroll of $20 million a year. Decommissioning the Yankee plants probably had a similar payroll, since the people in town saw little economic benefit from the presence of the contractors. As one well-connected man from Maine said: “I didn’t know anyone who got a job there.”
By careful assessment of multipliers, the total economic benefit of any project can look excellent. However, comparing apples to apples (on-site salaries to on-site salaries) decommissioning a nuclear plant is not a jobs bonanza compared to continued operation of the plant.
The Jobs Cliff
Closing Vermont Yankee will push the current plant workers off a jobs cliff, as described in a previous article. It will push the local economy off a cliff also, despite the presence of contract laborers. The contract labor force can be expected to have only about a third of the payroll of the operating plant.
Shumlin says that decommissioning is a “huge jobs issue.” It is, indeed, a huge issue. Decommissioning will be a huge job loss for southern Vermont. The one clear financial beneficiary from decommissioning Vermont Yankee will be low-level waste disposal sites in the West, and long-haul truck drivers. Decommissioning will be a financial loss for southern Vermont. It will destroy the local communities and the local job base.
---------------
A version of this blog post was published at True North Reports. I am grateful to Rob Roper for permission to republish it here.
Posted by Meredith Angwin at 1:00 PM

A point to consider -- Zion Solutions is decommissioning two large PWRs. VY is a single, smallish BWR. Should the Zion example be appropriately downsized to account for the smaller workload at VY?

Feel free to not post this if the anonymity bothers you, but the point is worth noting in an update to your post.

Very good points. I tried to do an apples-to-apples comparison and I still ended up over-estimating the jobs in decommissioning!

I don't favor anonymous comments, but I use my judgement. If the comment adds information to the conversation, I often allow it. I am aware that many people working for utilities don't want to use their names because they are not authorized to "speak for the utility." I appreciate their knowledge.

Another thing to keep in mind is job "quality". Engineers generally are in the business to build things, not destroy them. D&D jobs are, by and large, pretty lousy jobs. You're tearing out wiring, cutting out piping, knocking down walls, ripping out concrete, etc. At the end you have people walking around with mops and meters. That is not skilled labor. It is not done by an educated workforce. They are outside workers who will not stay behind to raise families, build communities, contribute to schools and community organizations, or become leaders in their towns and state.