You Loan Twenty-one Million and What Do You Get?

Well, if you are a Vermont ratepayer who loaned money to Central Vermont Public Service (CVPS), you do not get the money back.

Ratepayers were supposed to get the money back if anyone bought CVPS.  Green Mountain Power bought them, but there was a decision that that money-back idea was just silly, when the money could go to a fund. People can borrow from the fund for efficiency improvements. That would the same thing as getting the money back, if not better! (heavy sarcasm alert)

Gaz Metro is now owner of Green Mountain Power and CVPS. Gaz Metro doesn't have to return the money to the Vermont ratepayers.

I have many posts on this, including Money Settles into Gaz Metro Pockets Dust Settles Under the Dome.  In mid-June, the Public Service Board approved the merger, without any direct refunds to ratepayers.

In completely un-related news, the former Vermont House majority leader has taken a new job with Green Mountain Power. In general, the House Democrats have supported Governor Shumlin on everything connected with this merger. As Randy Koch commented on the Vermont Digger article about Lucy Leriche's new job: It’s really nice to know that what sorta looks like disgusting corruption à la New Jersey is actually just neighbors working for neighbors, working for Vermont, all on the up and up.  (Second sarcasm alert in one post.  This might be a record for me.)

A few days ago, we posted about an anti-nuclear author that was touring the area for the Hiroshima anniversary.  The author's name is Cecile Pineda, her book is The Devil's Tango, How I Learned the Fukushima Step By Step, and the tour was sponsored by the local anti-nuclear umbrella organization, the Sage Alliance.

Mainly due to Howard Shaffer publicizing this tour, there were pro-nuclear people at three of the author's events. In Brattleboro, Vermont, Richard Schmidt handed out his Vermont Yankee fact sheet.  On Cape Cod, Massachusetts, Dr Sam Martin, an ANS Northeast Region member, asked some questions about the rebuilding of Hiroshima (the author did not answer).  Here at the Howe library in Hanover, New Hampshire, near his home, Howard Shaffer attended.  Shaffer's post about this tour is up today at ANS Nuclear Cafe: Vermont Yankee Supporters at Anti-Nuke Book Tour.

Showing up is the first thing that nuclear supporters need to do.  This post is about the author-- and about three people who showed up. Read it and be inspired! 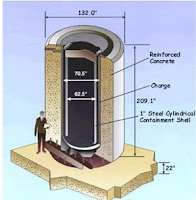 The NRC is now required to write Environmental Impact Statements for spent fuel storage. This is leading to the possibility of licensing changes (no new licenses will be granted until the NRC has set up plans for such statements) and a great deal of speculation.  Of course, I must blog about how this affects Vermont Yankee.  (It basically doesn't affect Vermont Yankee, for now at least.)


Posted by Meredith Angwin at 2:42 PM