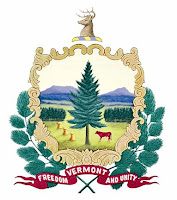 Vermont Yankee has a renewed license from the NRC to operate until 2032.  However, according to its Memorandum of Understanding with the State of Vermont, it also requires a Certificate of Public Good from the state Public Service Board (PSB).

According to Judge Murtha's federal court ruling,  the PSB cannot consider nuclear safety in its decision about Vermont Yankee.  Nuclear safety is regulated by the NRC at the federal level, and the state cannot pre-empt that federal prerogative for regulation. I have written so much on this subject that I really don't know where to begin linking to background information.

Scrubbing the Docket or a New Docket

It was hard for the PSB to know where to begin, too, but for different reasons.  In deciding about the Certificate of Public Good, the PSB had to decide whether to "scrub" the old docket of pre-empted issues, or start a new docket.

Mopping is hard work, and you're never sure if you're really done.   At least, that is what the PSB decided.  Entergy asked the PSB to review the old docket (docket 7440), avoid the pre-empted issues, and make their decision expeditiously.  Everyone was pretty sure that the PSB had already made a decision before the court case began, and if they chose, they would only need to release their decision.

That would have been "scrubbing" the docket, and there was reasonable fear that any decision could be challenged on the basis of insufficient cleanser.  The PSB decided to start a new docket.  In March of this year, Alan Panebaker described the PSB's new-docket decision in an article in Vermont Digger.

Since late March, the PSB has known it would be setting up a new docket.  For major pending dockets, the PSB posts web pages with links to testimony: here's the electric-utility docket web page.  The Vermont Yankee dockets on that page (7440 and 7600) are old and un-scrubbed.  The new docket number is 7862, and it isn't up on the web page yet.

In late June or early July, Entergy submitted "prefiled testimony" with the PSB. This testimony became a public document the moment they submitted it. As I mentioned in an earlier post, Entergy sent copies of some of the testimony to plant supporters and the media, including me and Howard Shaffer.

However, the PSB did not post the docket or the testimony,  Jeffrey Tranen's summary testimony seemed particularly interesting when I read it. Howard Shaffer did an excellent blog post based on Tranen's testimony. Eventually,  I put the Tranen testimony pdf on my Energy Education Project website.

And there the Tranen testimony remains.  I think the Energy Education Project website is the only place a member of the public can see Tranen's testimony (easily) at this point, because the PSB has not started a web-available site for docket 7862.

(I am sure testimony on this docket would be available if you asked the PSB to send it to you.  The people at the PSB are very helpful.)

Why is the Docket Missing?

First of all, I want to thank Susan Hudson, Clerk of the Public Service Board, for the help and information she shared.  She explained that there has been staff turnover. Consequently, some things (like updating the web site) have fallen behind.   They are working to solve this problem. Hudson was also kind enough to take the time to look up the dates of the hearings that have been scheduled on docket 7862.  (These hearings are supposed to be posted on the Calendar of the PSB website.) Hudson told me that the first hearing will be at Vernon Elementary School on November 7, and a second hearing will be held by interactive TV on November 19.  I appreciate Hudson's efforts.

In my opinion, however, the PSB website is not the real problem: the state government's priorities are the real problem. When a key PSB employee leaves or goes on vacation, it seems there is very little backup.   My conclusion is that the agency is underfunded.  At the same time, the state seems to have infinite money available for bringing lawsuits against Vermont Yankee, including hiring lawyers from Washington D.C. as consultants, sending Department of Public Service Commissioner Miller to Washington to argue before the Circuit Court, and so forth.

In my opinion, the Vermont state administration could reset its priorities to be better for Vermont citizens.  The state could spend a little more money on government staff and transparency, and a little less money on suing Vermont Yankee. Such a change would be all to the better.

Note: For a good overview of the current cases, I recommend this ten-minute radio clip from VPR and John Dillon. It's about a month old, but still relevant.  The reporters speak with a certain level of bias against Vermont Yankee, but they state the facts clearly.

Update August 14: Tom Buchanan commented on this post. He also sent me a note about documents posted at the VSNAP (Vermont State Nuclear Advisory Panel) website.  Quite a few documents are posted there. It's a grab-bag of documents, not a well-organized list for a public docket, but it is another source for Vermont Yankee public documents.  A big thank-you to Tom for this link!

Posted by Meredith Angwin at 6:55 PM

Email ThisBlogThis!Share to TwitterShare to FacebookShare to Pinterest
Labels: #7682, certificate of public good, Public Service Board

The full schedule was published in the Prehearing Conference memo on May 4, 2012. It's available on the PSB site at: http://psb.vermont.gov/sites/psb/files/orders/2012/2012-4/7862%20PrehearingConfMemo.pdf

Hopefully the Board will get all the material up on its site soon. At this point round one of discovery has been filed on Entergy and we should have responses by next Friday, August 17, 2012.