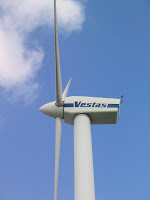 The Lowell Mountain Wind Turbine Facility, proposed for the Northeast Kingdom area of Vermont, has encountered much resistance, but Green Mountain Power (GMP) vows to complete the project despite objections. The politics are clear (follow the tax dollars) and many locals feel they are not being heard. Meanwhile, the wind farm energy is included in the future projections for electricity in Vermont.
Today, Willem Post has graciously shared his review of the Lowell Wind Farm with us. His most recent guest blog at this site was Subsidies for Wind and Solar. His posts are frequently featured at The Energy Collective.
Lowell Mountain Wind Turbine Facility in Vermont
by Willem Post, 14 June, 2011
The GMP-instigated 63 MW Lowell wind turbine facility with (21) 3 MW Danish wind turbines stretched along 4 miles of ridge lines has nothing to do with community-scale wind, everything with utility-scale wind. GMP is using blatant PR to soft-soap/deceive Vermonters. It is a capital intensive (63 MW x $2,500,000/MW = $157.5 million, excluding grid modifications), highly visual (410-ft tall wind turbines), noisy wind turbine facility that is proposed to be built on environmentally-sensitive ridge lines. It received a Certificate of "Public Good" from the Vermont Public Service Board, a mostly political entity.
The Lowell wind turbine facility would produce just a little of expensive, unreliable, intermittent, variable wind energy (63 MW x 1 GW/1,000 MW x 8,760 hr/yr x CF 0.30 = 165.6 GWh/yr, or about 2.76% of Vermont’s 6,000 GWh/yr consumption). This energy has near-zero dispatch value to grid operators, such as ISO-NE. For at least 10 percent of the year, the wind speeds are too low to produce any wind energy. Most of the wind energy is produced in irregular, varying, sporadic spurts at night during the winter. 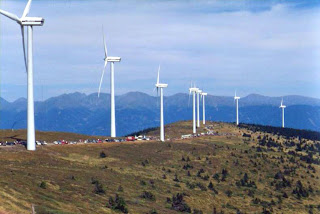 Carbon Dioxide and Wind
The project has nothing to do with reducing CO2 emissions or generating wind energy. Most of the CO2 emissions that wind energy was meant to reduce is offset by the increased CO2 emissions due to the inefficient operation of the gas-fired balancing facility, as shown by my paper on Wind and Carbon Dioxide at the Energy Collective.
For the same capital cost a new 60% efficient combined cycle gas turbine facility in base-loaded mode at rated output would produce:
($157.6 million/$1,250,000/MW) x 1 GW/1000 MW x 8,760 hr/yr x CF 0.90 = 993.4 GWh/yr
or about 16.5% of Vermont’s 6,000 GWh/yr consumption. This would be more than 5 times as much electrical energy per invested dollar.
Let's look at some of the advantages of such a gas-fired facility:
Job Creation and Wind
The Lowell wind turbine facility job creation is largely a mirage. The facility will temporarily employ a number of people during the construction phase for about a year. During the next 20 years, just a few people will be permanently employed to perform operations and maintenance. An enormous waste of capital to create just a few permanent jobs, as shown by this Vermont Department of Public Service study.
Following the Money
The project would not be built if there were no subsidies equivalent to at least 50% of the capital cost. Without subsidies, the wind energy produced would be at least $0.15/kWh delivered to the grid, significantly higher than New England average grid prices of about $0.055/kWh.
The project has everything to do with grabbing as much federal subsidies as possible and "coursing" them through Vermont's economy for the short-term benefit of the well-connected few . The beneficiaries include high-income, non-Vermonters looking for tax shelters and foreign companies supplying wind turbines. The long-term economic expense (higher electric rates) will be carried by the many.
Wind and Subsidies
Over the past 10 years, the subsidies for wind turbine facility owners have become so excessive that facilities are built in marginal wind areas, as on most Vermont ridge lines. Other facilities are being put in place before building infrastructure to transmit the wind energy to population centers, as in the Texas Panhandle. These wind facilities are built just to cash in on the lucrative subsidies.
Here is a partial list of subsidies:
The federal government and state legislatures are pressured to provide increasingly greater state subsidies to politically well-connected renewables vendors, developers, financial entities (such as Goldman Sachs on Wall Street) and their high-income clients who use them for tax shelters.
Wind Turbines Circumvent Environmental Protection
State legislatures and state government agencies are pressured to pave the regulatory ways to essentially circumvent state environmental and quality of life laws. Pro-forma hearings, usually required by law, are held to create a semblance of democratic process. These hearings effectively are rubber-stamp approvals of pre-ordained decisions.
Update: A popular post by Post! Turns out that Rod Adams also posted this as a guest post (longish story about how we both managed to post it the same day), and a revised version of the post is now up at The Energy Collective.
Vestas Wind Turbine from Wikipedia
Austrian Wind Turbines on Ridge, from Wikimedia
Posted by Meredith Angwin at 11:31 AM

And Vermonters would sacrifice their historic scenic heritage with monster whiriligigs like those because of FEAR of what MIGHT happen with a tiny footprint nuclear power site (and what Doomsday's happened with "the worst" so far?) I hope Vermonters get hip real fast of the _reality_ of the corrupted natural vistas they’d be leaving their children — not to speak local property values. I can’t imagine spoiling the Catskills and Adirondacks like this! What a sight following you up the Thruway!

Blowing things up is never the answer!

I don't know the specifics of fuel load interchangeability but Entergy has several BWRs and, assuming at least one of them is the same model as VY, buying a load should be a low risk decision.