Vermont Yankee, the Vermont Attorney General, and the Completely Political Timing of Lawsuits 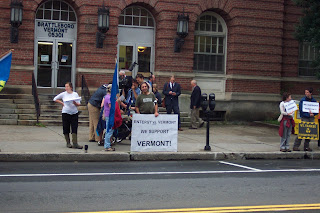 The Attorney General of Vermont, William Sorrell, is in charge of the state's defense against the Entergy lawsuit. Entergy filed for an injunction to prevent the state from shutting down the plant while the lawsuit is ongoing. The injunction hearings were June 23 and 24. At the end of the hearings, Judge Murtha said he wouldn't rule on the injunction before the July 4 weekend, though Sorrell doesn't expect the judge to rule until mid-July.
So, one might expect that we would all sit back and wait for the ruling?
Of course not. Not when Sorrell can muddy the waters by possibly bringing a criminal charge against Entergy, based on incidents that occurred approximately two years ago, and were thoroughly investigated more than a year ago.
Judges Read the Paper, Too
Last Tuesday, Terri Hallenbeck of the Burlington Free Press wrote that there would be an "announcement about whether or not there will be criminal charges filed against Vermont Yankee." Sorrell told Hallenbeck that the announcement would be made Thursday or Friday (just past) or this coming Wednesday or Thursday. Just in time to influence Judge Murtha.
Sorrell did not say whether there would actually be criminal charges: just that he would release the results of his investigation.
My Own Investigation
I have a blog post that is a year old, from June 2010, in which I report that the NRC says they received accurate information from Entergy.
What else was going on last summer? In May 2010, I described the extensive legal review of Entergy communications. This review, ordered by the Public Service Board, cleared Entergy of deliberately misleading anyone.
Or let's look at the to the Public Oversight Panel (POP) supplemental report, signed by Arnie Gundersen, no less, and issued in July 2010 of last year. This review was ordered by the Vermont Legislature. The POP also concluded that Entergy had not deliberately lied to anyone. Here's a quote from page 13
On the information presently available to us, we conclude that the first category (leading to NSA and Public Oversight Panel conclusions to the effect that no underground piping carrying radionuclides existed at Vermont Yankee) does not appear to have resulted from any deliberate effort to mislead on Entergy’s part.
And a quote from page 16
As noted earlier, the original error concerning the presence of underground piping does not appear to have resulted from a deliberate effort on Entergy’s part to mislead NSA or the Panel. We have not found other erroneous statements in our 2009 report. Nothing we have reviewed causes us to believe that other information from Entergy contains false statements.
Okay. Last summer. A year ago. Three reports (NRC, Public Service Board-ordered legal investigation, Legislative-ordered Public Oversight Panel). All investigated whether Entergy had lied. All cleared Entergy. 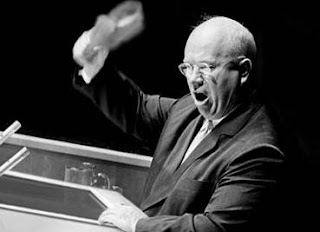 Last Year, This Year, All Around the Town
Three investigations cleared Entergy of lying by midsummer last year. Why is Sorrell making announcements about his investigation right now? A year later? While a judge is deliberating about the injunction?
What do you think?
This whole exercise is win-win for Sorrell.
Unless, of course, Judge Murtha is wise enough to notice when someone is pounding on the table. There's an old legal aphorism that goes: "If you have the facts on your side, pound the facts. If you have the law on your side, pound the law. If you have neither on your side, pound the table."
Sorrell is acting as if Judge Murtha is an inexperienced fool who will be swayed by this sort of grandstanding. I think Sorrell is wrong. I don't think a person becomes a federal judge while remaining that naive.
------------
Photo of protesters outside of Brattleboro Court house June 23, courtesy of Howard Shaffer. Bob Bady of Safe and Green Campaign in center of picture.
Picture of Khrushchev supposedly pounding his shoe on the table at U.N. in 1960. According to Wikipedia, this photo is a fake. Apparently, Khrushchev did pound his fists on the table at that U.N. meeting, but not his shoes. There's no available picture of Khrushchev pounding his fists.
Posted by Meredith Angwin at 12:30 PM