Entergy filed for an injunction to prevent the state of Vermont from closing down Vermont Yankee while litigation is pending. This injunction was denied on Monday.
The judge's wording for the injunction ruling caused some people to believe that Entergy will prevail in the main lawsuit, though it lost on the injunction. However, some plant people are talking about selling their houses. This week, Entergy must make a decision whether to order fuel for a November outage. Alternatively, they can NOT order fuel and shut the plant down in the fall. The cost of the fuel and the outage is about $100 million dollars.
In other words, this week Entergy will place a $100 million dollar bet (or not place it) about whether they are think they are going to win the lawsuit.
I'm going to put on two hats, Half-Full and Half-Empty, to discuss Entergy's position and choices.
--------------
The Law and the Judge's Ruling
Half-Empty: Looks like the plant is history. The first round went to the State: No injunction. Vermont Yankee can be shut down by the state while the lawsuit is proceeding. As Parentau of Vermont Law School described it: Judge Murtha called Entergy's bluff.
Half-Full: Well, Mr. Parentau isn't the only lawyer at Vermont Law School. I don't consider him a particularly strong voice about this matter. Parentau is the one who thought that act 160 passed (2006) because the cooling tower fell down (2007). He didn't even have the sequence of events right.
Two other lawyers at Vermont Law School, Hanna and Kreis, thought the ruling looked good for Entergy. Anyone reading the brief can see that the judge made no decision on the merits of the case, but stuck strictly to the question of whether the state's actions would cause irreparable harm to Entergy. In other words, did Entergy really require an injunction?
Half-Empty: It's all very well to read tea leaves this way, but face it, the judge turned Entergy down flatter than a pancake. His ruling doesn't bode well for the next hearing. You're just being Pollyanna. But of course, you always are.
Half-Full: Just because you are permanently crabby is no reason to insult me! I'm not just reading tea-leaves. Here's a couple of points the VLS professors made:
Half-Empty: Okay. So you are reading blogs, not tea leaves. But you aren't the only one that can read blogs! Another VLS professor thinks that the injunction ruling:
Half-Full: I think Parenthau's argument is weak. He tries to make the judge's misgivings about the State argument into some kind of pep talk for the state.
Half-Empty: I think the Hanna and Kreis's arguments are weak. The Judge denies Entergy's request, and they act like this is a great thing for Entergy.
Half-Full: Puh-leeze. Did you even read the judge's ruling?
Half-Empty: Hey, did you read it? Frankly, I think we should change the subject.
Half-Full: Okay. Best idea you've had yet. 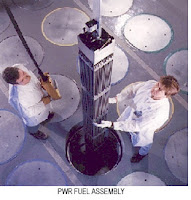 -----
Entergy Has to Make a Decision on Fuel
Half -Empty: It's all very well to dissect and analyze the statements of law professors who are themselves dissecting and analyzing the statement of a judge. Lots of fun! But would you invest $100 million dollars (the cost of the new fuel and the fall outage) on the belief that the upbeat interpretation of the judge's words is correct? You think Kreis and Hanna are better interpreters than Parenthau. Fine. Are you willing to bet $100 million on this choice of advisors?
Half-Full: Oh for heaven's sake. That's not the bet. It's not about those interpretations. The Entergy choices would be the same if Vermont Law School had never started a blog. It's about fuel ordering choices, not betting on lawyers.
Entergy has a lot of choices. For example, the judge has moved the trial date to September, so by the time of the planned outage, Entergy will know whether or not it has won the case.
So, right now, in July, Entergy could order fuel. If they lose at the September trial, they don't hold the outage. Yes, they have the fuel, but that is not lost money. They have other BWRs, and the fuel can be used in those, perhaps with some cost for modification. They won't lose all their fuel money, and they won't spend the outage money.
On the other hand, if Entergy orders fuel and wins the case in September, they can go ahead and refuel, pretty much on time. It's this sort of reasoning that encouraged the judge to deny the injunction. Entergy is not about to suffer irreparable harm from its choices. In his ruling, the judge gave Entergy a list of possibilities for managing the situation without losing tens of millions of dollars.
I must say, Half-Empty, you have managed to trivialize the grounds of Entergy's choice while exaggerating the financial consequences.

Half-Empty: That is absolute nonsense. What company in its right mind would spend $100 million dollars on such a bet? They would be betting the ruling will go their way, or, if it doesn't, that they will manage to use the fuel anyhow. There is a strong possibility that they will be throwing money away.
Is Vermont Yankee Worth An Investment?
Half-Empty: Speaking of throwing money away. Remember, when Entergy put the plant up for sale, nobody stepped up to buy it? That was a market assessment that Vermont Yankee is worthless as an asset. What company would put a penny into a place like that?
Half-Full: A smart company. A company that knows that a "worthless" asset can become a very valuable asset quickly when the only difference is a legal ruling. For example, Pacific Gas & Electric in California went to the verge of bankruptcy around 2001. Then a Public Utility Commission ruling allowed them to raise their rates, and---presto! Profitability! This type of scenario can and will happen again.
Half-Empty: Your analogy is flawed. Entergy owes a duty to their stockholders to avoid this sort of high-stakes bet. And, that is not all that is on the table. Bad things could happen in the future. For example, the NRC could make them do expensive upgrades, based on the NRC's interpretation of Fukushima.
Half-Full: Your reasoning is fallacious. You don't create value for stockholders by walking away from the good businesses. Bad things could happen in the future, sure, but so could good things! As a merchant plant, Vermont Yankee would have strong profitability, especially if the price of natural gas goes up. Fracking is big now and it's the great hope for cheap natural gas. But fracked wells have a shorter life-span than traditional wells, and plenty of people feel that gas prices are bound to rise after this round of frack drilling plays out. Maybe about five years from now. If gas prices rise even a little, that plant can be a gold mine for its owners.
Half-Empty: I don't agree with you, but you could conceivably be right. Even a stopped clock is right twice a day.
Half-Full: I don't agree with you, but you could conceivably be right. Even someone without a clock can guess at the time.
Half-Empty and Half-Full: We'll just have to wait and see.
Half Empty-Half Full Glass from Wikipedia
Nuclear fuel bundles being inspected (Unfortunately, the illustration shows a PWR bundle , not aBWR bundle.)
Texas Hold-em from Wikipedia
Posted by Meredith Angwin at 10:16 AM

Entergy has a lot more than $100 million riding on this decision. The undepreciated value of the VY plant improvements, for example, would be lost. Entergy owns other nuclear power plants and does not want VY closing to lead public opinion.

I think Entergy's best option is to refuel and continue operation, no matter what action the state takes. If the state sues or pursues an injunction against VY, then Entergy should claim premption, which much be resolved in federal courts, which will take years. There would be no reason to enjoin the plant from operating during this period, because of the 40 years of safe operation and the absence of irreparable harm.

Meredith – Funny post - your two halves sound like an old married couple I know – maybe they should seek counseling?

@Bob Hargraves. I agree with you that they should refuel, but I don't agree on the reasoning. The un-depreciated value of the VY plant improvements are significant money, around $400 million. You are correct about the level of money invested. However, where I disagree is that those are "sunk costs" and many a company has sunk itself attempting to recapture sunk costs. BUT, I agree with your conclusion. Forward-looking estimates, ignoring sunk costs, would almost certain say "refuel."

You are right. We should start a chant! The opponents are having "concerts to shut down Vermont Yankee". We can at least chant.