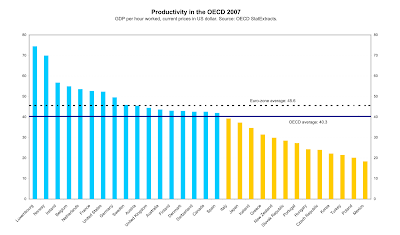 The short-term economic news is dreadful. First we had the Debt Ceiling wrangle, then the Standard & Poor's downgrade, and now, a continuing fall in the stock market.

Many pundits will ascribe many causes to this group of events. The causes will concern government borrowing, deficits, partisan wrangling in Congress, broken campaign promises, and so forth. I will leave those analyses to the pundits. They may be right.

As a simple matter, economic prosperity and growth follows economic productivity. If the average laborer produces $10 worth of goods in an hour, she can be paid perhaps $5 and use that to buy food, transportation, medical care and flat-screen TVs. If she can only produce $5 worth of goods in an hour, her pay will be closer to $2.50 an hour, and her living standard will be less. This has nothing to do with the value of the dollar or inflation or anything like that. It is a matter of goods and services produced. Productivity matters.

This post is headed by a productivity chart for various nations (double-click to see a bigger version.) Productivity and prosperity are not completely linked: I would say that the United States is probably more prosperous than Ireland, for example. But in general, prosperous countries have higher productivity (Norway, France, U.S.) and poorer countries (Mexico, former Soviet states) have less productivity in the workforce.

When Henry Ford paid his workers enough to buy the cars they produced, cars became a consumer item rather than a rich person's toy. He could afford to pay his workers this much because the Ford assembly lines allowed them to be productive enough to warrant this pay, without bankrupting the company.

Stagflation: Reasons For the Misery of the 70s

According to traditional economics, high inflation and high unemployment rates cannot happen at the same time. However, in the 70s, both existed at the same time: it was called Stagflation. Economists are still writing about the reasons this happened. Two major theories are that the 70s stagflation was caused by:
I'm not an economist, but I think these two may be related. If you cannot use more energy, it is harder to increase productivity

Productivity in My Experience

My husband and I worked in Silicon Valley in the late 90s and early 2000s, when our companies were becoming very excited about outsourcing certain types of intellectual work (programming, map digitizing) to India. Wages were lower in India, the workers were very well-educated, the Internet was allowing excellent communications. What could go wrong?

A lot could go wrong, as it turned out. Managers very quickly realized that while wages were lower in India, productivity was lower also. Managers had to pick and choose tasks carefully to come out ahead on the "outsourcing" business.

One of the main problems was energy. India's electric grid was pathetic. Blackouts were frequent. Companies had back-up generators, used as little air-conditioning as possible, and generally had a work environment that looked plain flaky to people who were accustomed to Silicon Valley businesses. Reliable, inexpensive electricity matters to productivity. The workers in India were great: the infrastructure was terrible. There's a reason that India is building electric power plants of all kinds as quickly as it can.

What Can I Do About Economics?

I can encourage productivity.

Reading the paper recently has been no fun at all. American treasury bonds being down-rated. Stock market has been nose-diving. I see that Congress is too full of grandstanding politicians to tackle the big questions. For me to affect the financial situation in this country feels hopeless.

What I can do is what I have been doing. I can help keep productivity high in America by encouraging reliable power, inexpensive electricity, and nuclear plants. Especially my local nuclear plant, Vermont Yankee. Think globally, act locally.

When I look at the paper, it is a relief to know I am doing something about the situation, however small my contribution may be. 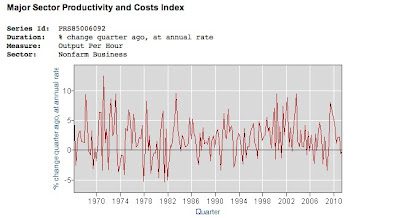 When that high-priced energy is rolled into the rate schedules, electricity rates will go up, productivity will go down, companies will relocate and/or fire workers.

The effects are no different than those due to an oil price increase which affects the bottom 90% of households much more than the top 10%.

One reason the real wages of these households have been declining since the late 70s.

Household incomes were kept steady because of more people working in a household, and having multiple jobs, and working more hours and thus having less idle and vacation time.

Higher prices for basic commodities always have a regressive economic impact. Passing laws that mandate a certain amount of high-cost, unreliable electricity (wind, solar) be consumed always hurts those at the lower end of the economic ladder the most. Anyone who claims to be concerned with "economic justice" should be pro-nuclear, as it provides a basic commodity at the lowest cost. I argue this with my liberal friends and it freaks them out every time. The "debate" usually ends with them calling me some kind of name, but that's the usual indicator that you've scored the winning point.

You have polite friends. At a demonstration, one man was losing an argument with me. He won it, though, by looking at me and saying; "Have a nice cancer." At least, he thinks he won it...

One of the things you may be missing in the renewables argument is the implied redistribution of income that many desire. By providing government subsidies to what are otherwise not economically viable energy sources, one can pretend to believe that we are taking from the rich and giving to the poor.
In reality, of course, we are giving to the renewable companies, but that point is frequently lost.