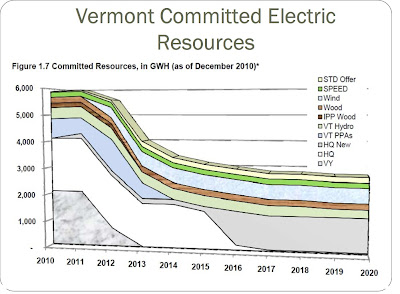 The chart above comes from the Vermont Department of Public Service website. Dave Lamont of that department drew this chart in March of this year. It shows the "committed resources" for Vermont's electricity supply. Vermont uses approximately 6000 GWh electricity per year. The chart shows power plants and utilities that have agreed to sell power to Vermont.
We can see the more-than-2000 GWh from Vermont Yankee (bottom left gray area) coming to an end in 2012. We can also see old Hydro-Quebec (HQ) contracts coming to an end in 2016 and new HQ contracts starting around that time frame, for slightly less supply than the old contracts.
The most noticeable thing on the chart is all that white space to the right of 2012--the who-knows-where-it's-coming-from part of Vermont's electricity supply. Roughly half the electricity supply after 2012 on this chart is white space: it simply isn't there.
Recently, new announcements of power purchases by Vermont utilities have re-assured people in Vermont that there's going to be plenty of electricity anyhow, if Vermont Yankee closes. However, there is less in these contracts than meets the eye, in my opinion.
The New Contracts
The big new contract is GMP (Green Mountain Power) with Seabrook Station Nuclear power plant in New Hampshire. GMP is going to buy 60 MW of power from Seabrook. That is about 1/3 of the power that Vermont obtains from Vermont Yankee. To see this amount on the chart above, draw a line at about 700 GWh above the existing lines. As you will note, the big supply gap is still there. For example, adding 700 GWh in 2017 (when the current HQ contracts phase out and we are on the new HQ contracts) moves the total supply to around 3600 GWh out of 6000 GWh required. Okay. So that's only 40% white space now. When we factor in the Seabrook purchase, only 40% of the electricity is "who knows where it is coming from?"
However, today's news included more announcements of power purchases, this time by Central Vermont Public Service (CVPS). CVPS bought 0.57 GWh through the end of 2012. The new contracts are opaque: CVPS said they held a "structured auction," and got a good price (4.75 cents per kWh). However, CVPS won't release the names of the auction winners. Nobody knows what kind of power CVPS bought. It's probably fossil based, because the Northeast grid is fossil based.
CVPS also had to get ready for the Vermont Yankee outage, and needed to buy power for that. As the Reuters article says: The contracts will also fill Central Vermont's energy needs during the planned Vermont Yankee refueling outage this fall, the utility said.
The Seabrook power purchased by GMP is available for many years, but the agreements announced today by CVPS are only for power through 2012, when the old and new HQ contracts are also both available. It's a short-term power purchase agreement.
That Chart Again: The Short-Term Power Purchase Agreements
Looking at that Committed Resources chart again, at the head of this blog, we can notice two new things.
It's hard to see what all the excitement was about.
Time for Perspective: Greenhouse Gases
Up until now, I have been describing the Committed Resources chart at the top of this blog post. It's not the only chart the Department of Public Service prepared for their March presentation.
Below is a companion chart, showing the sources of greenhouse gases for Vermont. While Vermont Yankee is running, the electricity section of the greenhouse gas emissions is low. However, after 2012, look at those emissions grow! By 2015, the electricity sector in Vermont is making more greenhouse gases than all the heating of all Vermont buildings (RCI fuel use). By 2020, with autos and home heating emissions steady, the electricity sector has grown to be the biggest emitter of greenhouse gases.
I have noticed that the emission chart says "electricity supply high-emission scenario" but I don't see a low-emission scenario in the presentation. I can think of a low-emission scenario, though.
If Vermont Yankee keeps operating, that is a low-emission scenario, and a very good one. 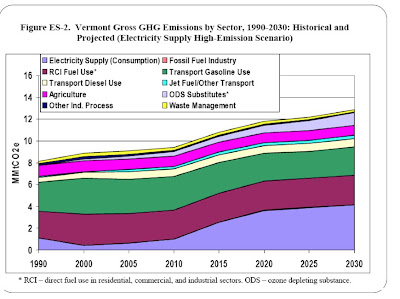 Notes: You can double-click on the charts to enlarge them.
I also blogged about the Committed Resources chart at ANS Nuclear Cafe.
Posted by Meredith Angwin at 9:41 AM

It could be added that the "White Space" doesn't mean no power. It means no power through a contract. The price will be the grid price!! Can be high.

That is right, Howard. I tried to imply it with my comment on "who knows where it is coming from."

The assumption is that the utilities will make up the lack of confirmed power through grid purchases. However, as you can tell from the left side of the chart, utilities prefer to have contracts when they can.

Also, this chart is for Vermont, but 2/3 of the power from VY is sold to the nearby states of NH and MA. So all three states will be scrambling for replacement power (market-based) in a comparatively restricted locality- near VY, not "the whole New England Grid". There will probably be power available for all three states to purchase, except on hot days, when a major line is down, etc. I have a couple of posts on grid reliability which cover this. ISO-NE says the reliability criteria will not be met without VY.

You should be working for the Department of Public Service as a well-paid consultant.

The VT-DPS could use some clear-headed thinking regarding energy matters and some backbone to stand up to the renewables mafia that is riding high on federal and state subsidies for solar and wind projects that would not have a prayer of a return without subsidies, that would likely not even be started.