That Strontium Fish in the Connecticut: Vermont Yankee, Shumlin, and the Facts 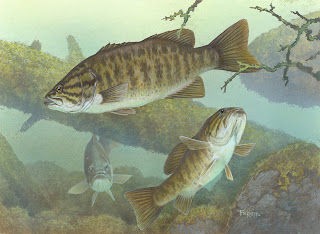 The Fish and the Facts

A smallmouth bass was caught nine miles upstream of Vermont Yankee power plant more than a year ago (June 2010). This fish was not destined to be eaten: it was tested for radiological contamination, according to Vermont's testing program for the river near Vermont Yankee. It turns out the the fish contained radioactive strontium, slightly above the detection limits, in its flesh as well as its bones. Though the fish was caught in 2010, it was tested only last week.

Was that fish contaminated by Vermont Yankee? The Vermont Department of Health didn't think the strontium came from Vermont Yankee. An article by Taylor Dobbs in Vermont Digger said that:

Bill Irwin, the radiological health chief of Vermont Department of Health, said his team doesn’t believe the Strontium-90 came from Vermont Yankee. There is no unequivocal evidence either way, he said. It’s possible, but very unlikely, he said, that cross-contamination of the non-edible and edible fish samples occurred. Irwin says he doesn’t believe the Strontium-90 found in the fish was from Vermont Yankee. “We would need to see a pathway between the source and the fish,” he said.

However, Shumlin thought the strontium came from Vermont Yankee, and he did something about it. He wrote a press release.

On August 3, Shumlin sent a strongly worded press release, directed at Entergy about the fish. Here's a quote: “Today’s troubling news from the Vermont Department of Health is another example of Entergy Louisiana putting their shareholders’ profits above the welfare of Vermonters."

The next day, Shumlin had a press conference, and he had to back off on his statement that this was Entergy's fault. According to today's Digger article by Taylor Dobbs, at the press conference, a day after his strong press release, Shumlin said: "We don't know exactly where [the strontium] came from."

The Fish and More Facts

The Vermont Department of Health website today has a complete listing of the facts about that fish. Basically, the Department of Health catches fish for testing. The bigger the fish the better, because bigger fish are more likely to contain radionucleides. The Department catches fish at two locations: right by Vermont Yankee's outflow, and nine miles upstream. This fish was caught nine miles upstream.

If there is contamination from the plant, it is expected that the fish caught near the outflow would be more heavily affected. However, fish do swim around, and the wildlife biologists said that a smallmouth bass could have swum ten miles upstream. (The problem with nature is that it just doesn't behave like a well-controlled laboratory)

Still, for a first approximation, the fact that the upstream fish had more strontium than any fish near the plant implies the fish was probably not contaminated by outflows from Vermont Yankee. As a friend of mine said: "Amusing when the control group is more contaminated than the sample group."Also, as Irwin said above, there is no clear pathway between the plant and the fish.

The Fish and The Wiggles

Science doesn't mean much to Shumlin if it contradicts his plans. Shumlin does his best to use this fish against Entergy, even though he can't actually use it because he can't say Entergy caused the fish to contain strontium. This leads to amusing wiggles at his press conference.

The video below is Shumlin's press conference yesterday, when he reluctantly admits that we don't know where the strontium comes from. However, he continued to attack Entergy for contamination. It's a frustrating video to watch because the sound is very poor. However, you can enjoy:
I find this press conference amusing, but not everyone does. One lawmaker objected that this sort of message from the governor would hurt the tourist industry in Vermont. The governor's office quickly issued a statement explaining that not eating the fish was a "personal choice."

I'm sure potential tourists will find that very reassuring.

Little Update: Thank you to Vermont Tiger for writing that Meredith Angwin's take on this latest dustup between the state and Yankee is, naturally, sharp and bankable.

Update: Ray Shadis, of New England Coalition, a hardworking foe of the plant, quoted on WAMC, says there is no indication, other than Vermont Yankee manufactures the isotope, that the Strontium-90 came from the nuclear plant.

As usual a thoughtful and scientific analysis. Thanks for the info! one question..and they waited a year to test the fish because...?Have a great weekend! Mary

Mary. I don't know why they waited. I think it may be because of the difficulty of finding labs that can make reliable measurements at these low levels. That is what I personally infer from the Dept of Health website, (my opinion only, and your mileage may vary) but there is no direct explanation given.

Strontium is not that easy to test for. From "Wormword Forest" by Mycio, p. 55, "A belarusian scientist once told me that doing strontium chemistry was 'women's work' compared to cesium....In contrast, just separating strontium from whatever matrix it is in requires a good deal of mixing, heating, centrifuging, and adding ingredients--all done in a beaker on a stove, just like a 'hausfrau' laboring over dinner."

Furthermore, there is a small, but significant, amount of strontium still left over from the atmospheric nuclear tests--and unfortunately, algae are great little concentrators of strontium, and strontium once consumed, stays in your bones forever.

(As a child of the 60's, I'm sure my bones have a certain amount of strontium, for example.) Who knows how old the fish is and where he dined and on what?

It's no surprise that the health department would not swear that a certain tiny amount of cesium came from VY.

excuse me. Last sentence should read strontium, not cesium.

Thank you for your thoughtful comments! Wormwood Forest is one of my favorite books, because it is so honest and, in the end, so hopeful (at least, in my opinion). Not Pollyanna hopeful, looking-at-the-facts hopeful.

Another friend emailed me with this link. It is a conversation between Matt Wald of the NYT and an acknowledged expert on radiological measurements.

Basically in agreement with your comments..