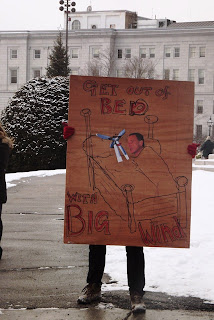 When Governor Shumlin presented his State of the State speech on January 5, protesters against wind development stood outside the Capital dome. They weren’t just protesting a wind farm, though. They were protesting Shumlin’s overly-close relationship with Green Mountain Power (GMP), the utility that is building the wind development at Lowell Mountain.
One sign showed Shumlin in bed with big wind. Another sign claimed that the Shumlin administration is a wholly-owned subsidiary of Green Mountain Power (GMP), the company building the wind farm at Lowell.
Why were the protesters carrying these signs? They noticed that there appears to be an overly close relationship between GMP and the Shumlin administration. However, the potential dangers of such a close relationship go far beyond the Lowell Mountain concerns. As reported in a previous article at True North reports, Who Owns the Infrastructure, and reprinted on this blog GMP is poised to take over the majority of Vermont’s energy infrastructure.
They will control most of the electricity merger through an upcoming merger with Central Vermont Public Service (CVPS) and subsequent control of Vermont’s transmission infrastructure. Meanwhile, the parent company of GMP is Gaz Metro of Quebec. Gaz Metro owns Vermont Gas Systems, and plans to expand the gas pipeline deeper into Vermont. A single Canadian company, Gaz Metro, is poised to own most of the gas and electrical infrastructure in Vermont.
Conflict of Interest
The relationship between Shumlin and GMP seems overly close, but can anybody prove it is a problem? Of course not. The reason most organizations (especially government organizations) avoid even the appearance of conflict of interest is that even the appearance makes decisions suspect. With conflict of interest in the background, decisions may appear biased. There is no way to prove they were fair.
While realizing that conflicts of interest are impossible to prove, we can examine the relationship between Shumlin’s administration and Green Mountain Power.
The Inaugural Ball 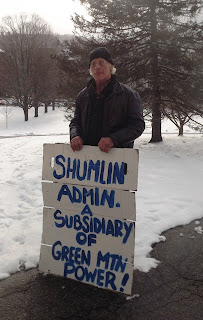 Green Mountain Power’s CEO Mary Powell is a strong supporter of Governor Shumlin. For example, Powell was responsible for raising the funds for Shumlin's inaugural ball.
In two posts in the 7 Days poltical blog, Shay Totten described Powell’s role in raising money for the inaugural ball. He then described how the Agency of Natural Resources (ANR) suddenly looked more favorably on ridge-line development after Shumlin took office. After the inauguration, ANR gave a go-ahead to the project despite continuing concerns about high-elevation wetlands. Before Shumlin took office, ANR scientists had said there was no way to offset the environmental effects of the wind farm development.
Wetlands and Money
For a graphic portrayal of some of the environmental issues, I recommend this video by Energize Vermont.
Why did ANR give permission for the Lowell Mountain wind farm before major environmental issues were addressed? As it happens, Green Mountain Power will lose $40 million dollars in federal tax credits if they don’t complete the project by the end of 2012. GMP’s parent company, Gaz Metro, has only $160 million a year in profits (all divisions). The United States tax credits are very significant to Gaz Metro’s bottom line.
Many environmental groups feel the Public Service Board (PSB) decision on the project was rushed and the PSB was overly influenced by the thought that GMP would lose money if they did not approve the construction.
As Energize Vermont's Lukas Snelling said in July: "The PSB and ANR must not allow GMP’s financially-driven construction schedule to undercut their obligation to protect the environment and provide all parties a say in the review process."
A Wholly-Owned Wind Farm
Green Mountain Power is building the Lowell Mountain project and will own it. In most cases, distribution utilities such as GMP buy power from other companies that own the power plants. However, in Vermont, distribution utilities are allowed to own power plants. Vermont has many small utilities and co-operatives that might disappear if they couldn’t own both the power plants and the distribution systems.
However, the post-merger Green Mountain Power will be an almost-monopolistic company in terms of distribution. For a company like this to own a power production facility could be considered a step backwards in terms of utility governance.
Natural Gas and GMP
GMP is owned by a gas company, Gaz Metro. Gas and wind are a natural pairing. Wind farms have about 35% capacity factor at best, and must be backed up with a type of power that can come on-line quickly when the wind dies down. Wind energy is usually backed up with simple cycle gas turbines: these operate like a jet engine, coming on-line very rapidly. No power plant that raises steam can come on-line quickly enough to back up wind energy. Coal, nuclear and biomass plants all raise steam and cannot back up wind energy.
It is Named Gaz Metro
As a matter of fact, the wind turbine will be “backed up” is a bit of a misstatement. Since the wind turbine will only operate about one third of the time (35% capacity factor), two-thirds of the electricity will come from the “back-up” facility. In other words, build a wind turbine, and and the back-up gas plant will provide twice as much electricity as the wind turbine provides.
Gaz Metro plans to bring its gas pipeline down to Rutland. It can perhaps put in a gas-fired power plant to back up the wind turbines that GMP (another Gaz Metro company) builds or encourages. The Comprehensive Energy Plan ecourages gas fired power plants.
As Guy Page of VTEP said, the new Comprehensive Vermont Energy Plan “talks a lot about building…medium sized natural gas plants.” The Comprehensive Energy Plan was put together very quickly, over the space of a few months, by Governor Shumlin's administration.
Wind and Gas and Robert Kennedy Jr.
The gas industry recognizes that wind can encourage natural gas use for electricity generation. For example, in a 2010 speech to a Colorado Oil and Gas Industry convention, Robert Kennedy Jr. describes his work on encouraging renewables. He ends the speech with a crowd-pleasing statement: “The plants we are building, the wind plants and the solar plants, are gas plants.”

Probable Changes in Vermont Energy, After the Merger
In short, if the administration favors GMP and encourages the merger (which they are doing), Vermont will have its infrastructure run by a foreign utility. Vermont will encourage the mixture of wind turbines and gas power plants that are very profitable for that utility. This is a long way from the situation we have now, where the large distribution utilities do not own power plants.
There are many reasons to think this situation will be worse for Vermont ratepayers than the current situation. The Vermont Public Service Board (PSB) and Department of Public Service (DPS) are supposed to protect Vermont’s interests. When Vermonters have suspicions about overly cozy relationships between politicians and power companies, these agencies are supposed to protect the consumer. Are the DPS and PSB doing their jobs?
----------------------------
The pictures of Lowell Mountain Protesters at the State of the State speech were shared by the writers of the Lowell Mountain News blog. For more information on that controversy, go to the blog
http://lowellmountainsnews.wordpress.com/
Note that the Lowell Mountain bloggers were very generous. They did not see this post before agreeing to share their pictures. Their loan of the pictures does not mean endorsement of the contents of this post.
References: Shay Totten articles: http://7d.blogs.com/blurt/2011/01/corporations-line-up-to-fund-shumlin-inaugural.html
http://www.7dvt.com/2011tilting-turbines
Lukas Snelling quote: http://vtdigger.org/2011/07/10/green-mountain-power/
Guy Page quote: http://www.vpr.net/news_detail/92570/shumlin-energy-plan-criticized-for-natural-gas-com/
Rod Adams blog, with a more extended video of Robert Kennedy Jr and more context on his statement: http://atomicinsights.com/2010/11/robert-f-kennedy-jr-tells-the-colorado-oil-and-gas-association-that-wind-and-solar-plants-are-gas-plants.html
This post is the second in a series. The first was Gaz Metro: Who Owns the Vermont Infrastructure.
I wrote this post for True North Reports. I am grateful for the opportunity to reprint in this blog.
Posted by Meredith Angwin at 12:30 PM

Thanks for explaining this in a thoughtful factual way. have a great weekend, mary gerdt

Meredith - Your work in telling the truth is important. Keep it up.

There's another type of renewable, sustainable nuclear reactor design, called a Liquid Fluoride Thorium Reactor, or LFTR. An outfit called Flibe energy, started by Kirk Sorensen, has massed a great deal of knowledge about it. The salient features of the technology are that:

The fuel is dissolved in a liquid, and therefore cannot melt down -- Duh!

It runs at temperatures high enough to drive a gas turbine.

It replenishes its fissile uranium by breeding more from thorium using thermal neutrons.

It responds to changes in load, automatically, by thermal changes in the volume adjusting the rate of neutron moderation.

It rids itself of certain neutron poisoning gaseous fission products, at the surface of the liquid.

I love the LFTR and have several friends very involved with it. I also gave a poster session about it at a conference two years ago. But I don't want VY to be replaced with fossil fuels while they get the new types of reactors going!

Did this blog raise any concerns when Entergy sponsored Gov. Jim Douglas' Ball?

Your memory is poor, as is your fact-checking. This blog started in January 2010. Shumlin's inauguration was the only inauguration since the blog began.

And even MORE incorrect "facts"! Entergy and many other Vermont businesses contribute to the Governor's ball. Entergy did not sponsor it.

Please fact-check more carefully in the future. It is tedious to have to keep correcting you.