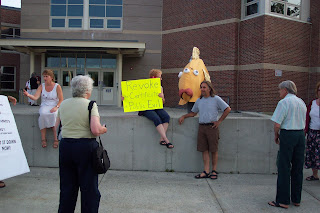 All fish are radioactive. South Vermont fish, North Vermont fish, all fish.
The Vermont Department of Health (DOH) periodically tests radiation levels of fish in the Connecticut River. They always find background levels of radioactive strontium and cesium in the fish. Meanwhile, the opponents always say that Vermont Yankee contaminated the fish.
In the past two days, the DOH has announced test results of fish from the far north of Vermont, far from Vermont Yankee. The fish had the same level of radioactivity as the fish near the plant. Background levels.
The Northern Fish
Both the Brattleboro Reformer and the Burlington Free Press posted stories about the measurements of the northern fish.
Here's a quote from the Reformer: "The results are that cesium-137 and strontium-90 in Lake Carmi fish is in the same range as Connecticut River fish," said Irwin. "We take this as some evidence that all fish in Vermont are likely to have radioactive cesium and strontium at these levels and that, as we've hypothesized, it is from nuclear weapons fallout and the releases of Chernobyl. All of us are glad to have proof and not just conjecture."
....
"There's no danger in eating the fish," said Irwin. "Should we ever find that there are reasons to restrict diet from any sampling for any kind of radioactive or toxicological events, we would keep in mind different cultures have different diets."
(Bill Irwin is the radiological safety officer of the Vermont Department of Health)
In the Burlington Free Press, David Deen, a long-time foe of the plant acknowledged, however, that if future samples remain consistent, then Vermont Yankee officials were right that the plant was not the source of the strontium 90.
A Partial History of Fish Scares
Claiming radioactivity in the fish is due to the power plant is a well-worn tactic. In 2010, when strontium was detected in a fish from the Connecticut River, the nuclear opponents made this a centerpiece of their marches. Maggie Gundersen said that people should "throw the fish back" and not eat Connecticut River fish. Her husband, Arnie Gundersen, said they were finding radioactive fish near the plant but "blaming the bomb." In other words, he implied that Vermont Yankee was saying the fish had merely background radiation, but that was just a way to avoid acknowledging that it was Vermont Yankee's fault. My blog post It's the Nukes What Gets the Blame describes these events.
In 2011, there was another fish with strontium. Governor Shumlin said he wouldn't eat fish from the Connecticut River because of the strontium in this fish. Meanwhile the head of the Vermont Department of Health contradicted him, saying the fish was safe and the levels were low. I have a video of this press conference in the post That Strontium Fish in the Connecticut River. Later, Lochbaum and Markey weighed in on the side of the governor. I blogged about their assertions, also. They exaggerate.
Potassium and Strontium
In a wonderful guest post, Richard Schmidt compared the relative dangers of strontium, mercury, and naturally-radioactive potassium in the fish. In his post What is the Real Impact? Richard Schmidt on Strontium, Mercury and Potassium in Fish, Schmidt points out that 2 % of the radioactivity in the fish comes from strontium, and the rest comes from natural potassium.
Yesterday, the Brattleboro Reformer said pretty much the same thing. In the Reformer: In the same analyses, the fish had almost 500 times more potassium-40 in them than they do cesium-137, [Irwin] said. Potassium-40 is a naturally occurring radioactive material that is in nearly everything and was created when the planet was formed billions of years ago, said Irwin.
In other words, the natural radioactivity in the fish swamps any man-made sources of radioactivity.
It is safe to eat the fish. The fish in the north of Vermont. The fish near the plant. All the fish.
The Bomb: Not Banned Soon Enough
Where did all that strontium come from? It came from atmospheric testing of nuclear weapons. Fallout is real. Fallout measurements are not something a power plant "hides behind." Though the atmospheric test ban treaty in 1963 stopped most of bomb testing, there have been 2000 bomb tests.
On this video, you can see the accelerated rate of testing through the early 60s.
-----------
Picture at the head of the post shows me approaching Blinky the fish outside a Public Service Board meeting in July 2010. I have the light-green top and black purse: Blinky has three eyes. Picture by Howard Shaffer, published in earlier blog post.
Posted by Meredith Angwin at 2:41 PM

So, do you think any apologies will be forthcoming from people like Gundersen, Shumlin, Markey, or Lochbaum for being wrong? Something tells me there won't be. Being an anti-nuke means never having to admit you were wrong (because your motives are "pure").

The three eyed fish shows that the antis can do great theater. If they really believe the the low level of radiation involved could produce a three eyed fish, and that is the only way a mutation can happen, then they are proving to the world that they are stuck in 1950's science fiction.

Anon and Howard. Thank you for your comments!

Anon. Nope. They won't apologize. However, I did find one thing quite amusing. As you may have noted in my other blog posts, AP tends to fill its stories with lengthy quotes from plant opponents. (See my recent post about the Public Service Board)

When the north country fish measurements came out, all the local papers wrote reasonably long articles about it. AP had a two-paragraph statement with almost no content. I suspect AP couldn't get Lochbaum, Shadis, etc., to comment, so AP had nothing to write! I don't know of course, why they didn't write anything. But I can speculate :-)

Howard. Actually, it's worse. I realized that that costume is Blinky the Three Eyed Fish from the Simpsons. The opponents are basing their campaign on the technical merits of a TV cartoon.

I got to admit, the state should have been better with explaining background levels...

How news is reported to us is very narrow across the board.

Thank you for your comment. I totally agree. Too often, the news media go for the big headline, and they skip the context. As you said, the reporting is "narrow."

Irwin said
"Potassium-40 is a naturally occurring radioactive material that is in nearly everything and was created when the planet was formed billions of years ago,"

As a matter of fact, he didn't go far enough. Like uranium, thorium, gold, arsenic, and mercury, it was created in supernova events even more billions of years ago. Astrophysicists are pretty much agreed that this applies to anything with a bigger atomic mass than iron and nickel, and most other radioactive isotopes like potassium-40.