Hurricanes and Nuclear Plants in the Main Stream Media

In my post on Friday, Fear and Facts about Nuclear Plants and Hurricanes, I quoted nuclear opponents and nuclear supporters about the hurricane's probable effects on nuclear plants. I concluded that opponents and supporters were publishing only in friendly venues. Both sides were Preaching to the Choir.

You see, I would like to write a blog post that nuclear plants were treated better in the press because nuclear communicators were doing such a bang-up job.  But I have come to the conclusion it had very little to do with us.  There were thousands of stories as New York City was ravaged, people drowned in their houses in New Jersey, hospitals were evacuated. It quickly became clear that the nuclear plants weren't a story.

However, in one case, the industry fought back to opponent scaremongering. That's my kind of story.  So I'll start with that.

The Business Press: Fighting Back Against Scare-Mongering

Kasia Klimasinska and Brian Wingfield quoted Gundersen as follows (note Gundersen's sequence of "ifs". I find Gundersen to be rather "iffy".) Gundersen said that if Oyster Creek was generating power, and the flood waters been just 6 inches deeper, it could have knocked out the pumps and triggered a disaster.

Now, what do you expect the plant owners would say about that?  I know what I expected: "Oyster Creek makes safe operation its highest priority (etc etc blah blah)."  To my surprise and happiness, Exelon actually said: “That is unequivocally false, Oyster Creek has numerous, redundant sources of reactor and spent-fuel pool cooling that would be fully operational regardless of the water levels mentioned,” Exelon’s Tillman said.

The Exelon comment was wonderful.  Every now and again, I get to root for my team, because they are actually playing!

Jim Conca wrote: Although those with real ideological issues against nuclear energy may have gotten bit excited, there is nothing so far to worry about with respect to the nuclear plants. There is no special issue or peculiar risk here for the nuclear plants in the path of Hurricane Sandy.

He commented further: I truly respect Amy Goodman, but I wish she had asked a real nuclear expert to talk with her on Democracy Now! yesterday, not an anti-nuke activist like Arnie Gundersen who doesn’t really know the nuclear technical stuff, but only cares about politics. 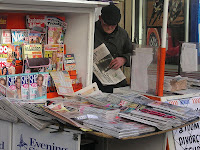 There's a website about small cap stocks. Small Cap Network. It's not  exactly the huge business press, but it has its audience. Their article was Nuclear Plants in the Path of Hurricane Sandy (And Anti-Nuclear Activists).

The article starts: Anti-nuclear activists and the media have apparently wasted no time to try and get people panicked about the 26 nuclear plants in the path of Hurricane Sandy.

First, the New York Times story by Matt Wald:  Nuclear Plants Get Through the Storm with Little Trouble, which says pretty much what the title implies.

John Horgan at Scientific American asks Does Sandy Mean We Should Have Fewer Nuclear Plants or More?   He concludes that, due to global warming, we should definitely have more nuclear plants.

Meanwhile the mainstream press is following the real stories, not the scare stories.  For example, ProPublica asked Why Do Hospital Generators Keep Failing?  Three New York City area hospitals had to be evacuated when their generators (badly placed or badly maintained) failed.  Hundreds of critically ill patients had to be moved.

The real stories. Gas has been difficult-to-impossible to obtain, the port of New York was shut for an extended time, lines of ambulances were pulled into service to evacuate hospitals, people drowned in their homes in New Jersey and  Lower Manhattan.  These are the stories the newspapers are covering.

Nuclear opponents are probably gnashing their teeth that their carefully-contrived "what if" scenarios are being neglected. But the press is busy with the true, painful, sad stories of Hurricane Sandy.

The nuclear plants were okay, as pretty much everyone expected.

The main stream message out of this is, the media is near death as viewership is dying...the utilities and NRC have a total hammerlock on controlling information coming from the nuclear plants.

The story is on the presented news...not what really happened...as the young reporters are lazy and don't know nothing....

The story is, we just may have entered the bow wave of a natural gas low electric price and utility crisis of historic proportions....witnessed by the poor profit and deflating stock prices caused by their just released quarterly financial reports.

You know what i think about Oyster Creek, we would have been 10,000 times safer if it was a 2012 model year nuclear plant with the current state of the science engineering and transparency....

I call it NRC collusion with Exelon for payola with Dresden also, to broadly turn a blind eye to not enforce hurricane and flooding regulation across all their plants. I think a lot of senior NRC executives are eyeing big executive Exelon jobs in exchange for little flood and hurricane protection....

Mike Mulligan: While I too would like to see us start building more modern plants with additional safety features, I'm not sure where you come up with the number "10,000 times safer"? Seeing as there was no disaster at any of the plants, I'm not really sure how you can view the current plants as so hugely less safe?