Areva and Helen Caldicott, plus More on Hurricanes

Helen Caldicott recently went to Canada to talk about uranium mining.  She called the nuclear industry "immoral" and compared it to Hitler.  On a radio show, she refused to back up her statements, becoming angry instead.  The radio interviewer wrote that  she “sounded like a person unhinged.”  Today, I was pleased to see Jarret Adams of Areva refute her statements about Canadian mining in his blog post: Helen Caldicott Stays One Step Ahead of the Facts. 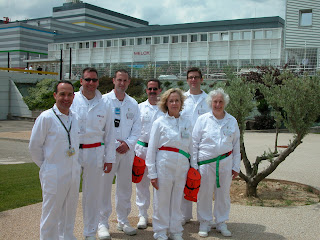 I thought I should illustrate this post with a picture of Caldicott, but I couldn't bear to do so.  Instead, here's a picture of a bunch of us at Areva's nuclear fuel recycling facility in France, about two years ago.  That's Jarret standing behind me (I'm the white-haired woman on the right).  Rod Adams is standing next to Jarrett and behind Gwyneth Cravens.

Okay, the rest of the names are Jack Gamble (next to Rod) and Steve Aplin (next to Jack) and a very knowledgeable Areva manager at the left side of the picture.  I am so sorry I don't have his name in front of me!  I guess that is why you can amend blog posts.

Update: We are standing in front of the Melox facility, and the man on the left is Regis Faure of Areva. Thank you to Jarret Adams for this update!

Do read Jarret's post: Helen Caldicott Stays One Step Ahead of the Facts.

Since I have already mentioned Rod Adams, I want to say that Margaret Harding, William Davis and I were on Rod's most recent podcast.  Atomic Show #190: Nuclear Plant Performance During Hurricane Sandy. I linked to  the announcement of the podcast. Here's a link to the podcast itself.  It was a great discussion. I learned a lot from Margaret Harding's honest, blunt and basically optimistic discussion.

Meanwhile, my blog post Hurricane Sandy and Nuclear Plants in the Main Stream Media has been posted at The Energy Collective.  I am always proud when they choose one of my posts.


Posted by Meredith Angwin at 4:00 PM

"I thought I should illustrate this post with a picture of Caldicott, but I couldn't bear to do so."

That's what I like about Meredith. Always considerate of her loyal readers, helping us keep our tummies settled.

You are a peach.

Blunt is definitely a good description of me. "She who talks too much" would also be appropriate.

I think it would be great to have a photo of your group on top of the vitrified waste storage here :
http://www.myop.fr/fr/archives-serie/detail?q=160&photo=6976
(with the comment that one storage warehouse is enough for 30 years of used fuel in France)

You didn't have the opportunity to go there ?

Anon: Thanks for noticing that I am considerate of my readers! :-)

Margaret: I dunno. "Blunt" and "informative" are more the Real You than "talks too much"." Thanks for calling me a "peach." I will consider that to be the Real Me.

jmdesp: No, we didn't get to walk over that floor with the vitrified fuel. We all wanted to do that and we were disappointed. Other parts of the tour took too long and we had to leave.

Jarret Adams, our main tour leader, was also disappointed, and frankly, he was a little peeved. He has given several tours of the reprocessing facility. In about half of those tours, the tour took too long and people couldn't walk over that vitrified fuel floor.

In general, after a tour, we had a train to catch....so sometimes we had to hightail it out of the facility quickly Also, that floor is in the La Hague facility in Normandy. This picture is in the Melox facility in the south of France.

Dashing out of La Hague without visiting that room was a big disappointment, but I am so grateful for everything else I saw that I rarely remember my disappointment in that.