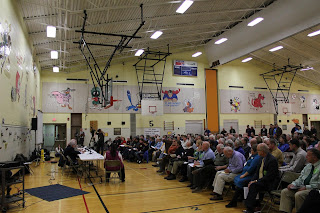 National Notes about the Public Meeting

Today, I have a guest post at the American Nuclear Society's Nuclear Cafe Blog: Vermont Yankee's Greatest Hits from the Public Service Board Meeting. The post consists of excerpts from five of the statement presented in favor of Vermont Yankee at the November 7 Public Service Board meeting.  I included parts of the following statements:
I tried to figure out how I had chosen these statements among so many good statements.  Then I realized: The ANS blog reaches a national and international audience.  I chose statements that were specific to Vermont, but had general applicability to most nuclear plants.

Read it and enjoy it!

Inter-National Notes about the Public Meeting:

Nuclear Power in Vermont and Ontario: The locals fight back, intelligently.

By the way, there's a lively and somewhat acrimonious comment thread on the latter blog post. My favorite comment is this one, which took a very unexpected turn:

"I can’t see why we even entertain this debate. I’ve lived off-grid for 23 years using wind, solar and a fossil fueled generator. Being totally responsible for my own electricity needs has made me a bit of an energy wonk. Its also given me a strong appreciation for the huge benefit nuclear energy has provided for this province. This long, hot, windless summer was a great example."

Similarly, Rod Adams of Atomic Insights comments on the meeting in his blog post, On the Atomic Insights Radar. November 19.   Since that post also covers nuclear stories in Canada and India, I decided to count it as "international."  I am sure Rod won't mind!

All Politics is Local

Ultimately, all politics is local.  Ultimately, only a few people will be known at a national level, but we can all influence the choices made in the area where we live.


Posted by Meredith Angwin at 5:05 PM