Vermont Yankee Meetings As Described on Other Blogs 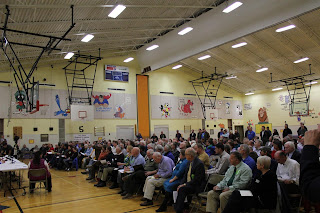 I was pleased that three other blogs also reported on the Vermont Yankee Public Service Board hearing on November 7.

Howard Shaffer's blog about the November 7, meeting, posted at ANS Nuclear Cafe, tells all...the preparations, the pizza, the success, the lessons learned.  A great post! (as you knew it would be)

Steve Aplin writes about our fight for Vermont Yankee, and a similar fight about a fuel pellet plant in Toronto.  As Aplin writes:  the Vermont Yankee fight might provide examples on how to use intelligence and reason—faculties available to all humans—to overcome medieval superstition.

Note and full disclosure: Steve Aplin, Rod Adams and I travelled through France together in 2010. We are friends.

Gosh.  I have a hard time quoting Aplin's post.  It's surprisingly hard to accept praise.  Okay.  One quote. This is about the Nov 7 statements made as guest posts on this blog, and about me: The writers (of the statements) represent a diverse range of views and backgrounds, but are all in favour of keeping the plant running. When you read the articles, you will immediately note the intelligence and quiet passion with which the writers present their views. To me, this is no surprise. Meredith embodies the western critical intellectual tradition at its best.

I also want to thank Cheryl Twarog for her kind note on the Aplin  blog.

In this blog post about various nuclear issues, Rod Adams reviews the environmental advocacy of John Droz, who is a thorn in the side of the wind industry.  He comments on the latest predictions of the rising price of natural gas.  He reviews the work we are doing in Vermont, and quotes Steve Aplin about me.   He wishes us well on the interactive hearing.

This is a wonderful post about the shape of the world of energy.  And...this just in! The Energy Department has just released the funding (cost-sharing funds) for the Babcock and Wilcox modular mPower Reactor. Since this is the project that employs Rod Adams, it is good news for Rod and his friends, as well as Very Good News for the nuclear industry!


Update: I wrote " yes so true"above, and I meant that the opponent's arguments were superstition, and we must use reason to combat them.  When I reread this, "yes. so true" was not very clear.

The opponent's arguments are be-afraid.  This is a mark of superstition, unless supported by facts.  We must use our reason to combat any type of "be afraid" that is not supported by evidence.  People near nuclear plants don't get more cancers than people anywhere else.  Alas, history shows that you can teach people to be-afraid...of anything.  If you work hard enough at teaching them.  End Update.